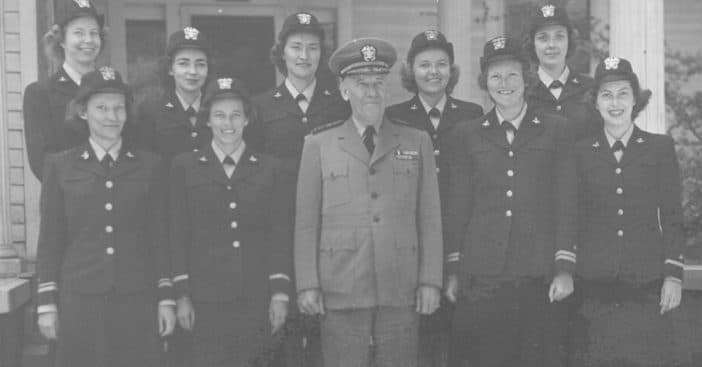 Estelle Leinen of Dow City, Iowa is a WWII veteran and is going to be celebrating her 100th birthday—and you can help her celebrate! The U.S. Navy is now asking people to send Estelle birthday cards to help her celebrate, seeing that she’s one of the last remaining U.S. Navy Women Accepted for Volunteer Emergency Service (WAVES) veterans who served in WWII.

Born in Chicago and a 1940 graduate from Providence High School, she was recruited to join the WAVES and served as a recruiter for the Navy after her five brothers died during WWII. Those fallen brothers later became the inspiration and basis for the films Saving Private Ryan and The Fighting Sullivans.

Estelle Leinen of Dow City, Iowa, is one of the last remaining veterans of the U.S. Navy Women Accepted for Volunteer Emergency Service in WWII. Now, the Navy is encouraging people to send Estelle birthday cards as she celebrates 100 years. https://t.co/4mRCR7uIeB

WAVES was an organization made specifically for women during WWII, signed into law by President Franklin D. Roosevelt in 1942. Around 87,000 women served in WAVES from 1942 until the war ended and the organization was disbanded in 1946. Estelle’s son Vincent Leinen talks more about WAVES and his mother’s involvement in the war.

“Women have had an interesting backseat role for probably 100 years in America, if not the world. My mother is a breaker of that bias,” he says. “She was one of the first WAVES, and the Navy WAVES was one of the first branches to allow women in the service. Now, women make up 16% of the Navy and they’re in the Army, Marines, Air Force, Coast Guard. That’s due in part to the great impact that the Navy WAVES had on the military.”

It was while serving that she met her future husband, Lavern “Spider” P. Leinen. They’d marry in 1946 and go on to have six children, 14 grandchildren, and 22 great-grandchildren, and Vincent couldn’t be more proud of who his parents are, and who they came to be.

“It made me proud,” he says. “Everybody thinks their mom or dad is special, but what’s cool about my mom is that she was a WAVE. No one else in the state of Iowa can say their mom was a WAVE.”

Now so close to hitting the big 1-0-0, she enjoys a quiet life sipping her favorite beverage: a McDonald’s frappé. “I asked her a couple days ago (how she lived to 100), and she said she doesn’t have a clue,” says her son. “I’ve always said it was a blessing from God, that she has a guardian angel who’s been watching over her all these years.”

Click for next Article
Previous article: Rare 1977 ‘Star Wars’ Poster Sells At Auction To Help Ukraine
Next Post: How And Why Dolly Parton Starts Her Day At 3AM: “It’s Just A Little Clock Inside Me”