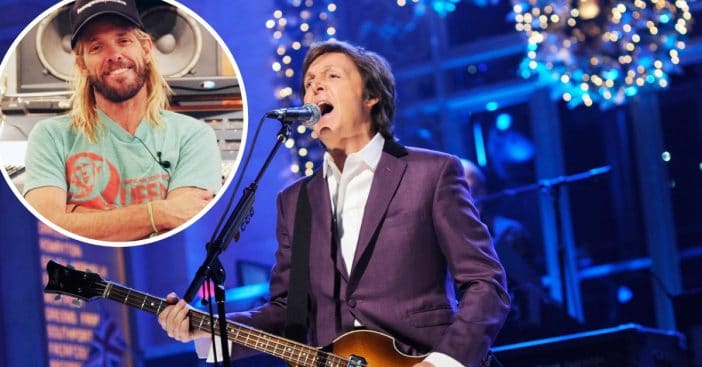 The Foo Fighters drummer Taylor Hawkins recently passed away at the age of 50. Sadly, he died just before a Foo Fighters concert in Columbia, after complaining of chest pains. His official cause of death is currently unknown but he did have a mix of several different drugs in his system when he died. Now, other musicians are paying tribute to Taylor amid the shocking news of his passing.

Beatles star Paul McCartney is one of those musicians. He recently helped induct Taylor and the rest of the Foo Fighters into the Rock and Roll Hall of Fame. Paul shared a photo of himself and Taylor and wrote a heartfelt tribute to him.

Paul McCartney shared a tribute to the late Taylor Hawkins

He wrote, “Taylor’s sudden death came as a shock to me and the people who knew and loved him.⁣ Not only was he a GREAT drummer but his personality was big and shiny and will be sorely missed by all who were lucky to live and work alongside him.⁣ I was asked by the Foo Fighters to play on one of their tracks. It turned out that they wanted me to play drums! – on one of Taylor’s songs. This request came from a group with TWO amazing drummers!”

Paul continued, “It was an incredible session and cemented my relationship with Taylor and the guys. Later they asked if I would induct them into the Rock and Roll Hall of Fame. I sang with them on ‘Get Back’. Taylor provided a powerhouse drum part. I’ll never forget that night. All of which made it much more of a desperately sad shock to hear he had died. So thanks Taylor for sharing some glorious minutes with me. You were a true Rock and Roll hero and will always remain in my heart.⁣ God bless his family and band – Love Paul X”

All of the Foo Fighters’ upcoming tour dates have been canceled. May Taylor rest in peace.

RELATED: The Foo Fighters Paid Tribute To The Late Charlie Watts At The VMAs