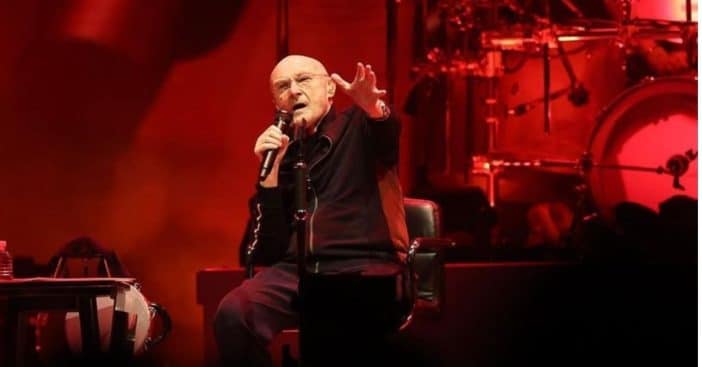 Phil Collins of Genesis has bid farewell to his fans with an emotional final concert. Amid ongoing health issues, Collins had been performing this past tour from a chair, joined by Genesis bandmates Mike Rutherford and Tony Banks for their last show ever at London’s 02. Collins had quipped to the fans of the show that after this final concert, he’d now need to find “a real job.”

The band had reunited for their The Last Domino? Tour, which had been postponed due to COVID-19. The final tour came after a 14-year live performance hiatus.

Collins has been suffering from a number of health issues, including dislocating vertebrae in his neck in 2007 that left nerve damage to his hands. Since then, he has been using a cane since 2015 (when he had back surgery), and revealed recently that he can barely hold a drumstick.

“I don’t do anything at all. I don’t practise singing at home, not at all. Rehearsing is the practice,” he told The Guardian in September 2021. “These guys are always having a go at me for not, but I have to do it this way. Of course, my health does change things, doing the show seated changes things. But I actually found on my recent solo tours, it didn’t get in the way; the audience were still listening and responding. It’s not the way I would have written it, but it’s the way that it is.”

Genesis first formed in 1967, eventually becoming popular in the ’70s and selling more than 100 million records. Collins had become the bands drummer and backing vocalist in 1970 before he eventually became the lead vocalist in ’75. The OG Genesis members Peter Gabriel and guitarist Steve Hackett were not present for the final show.

Click for next Article
Previous article: See The Photos: Savannah Guthrie’s Kids Crash Jimmy Fallons ‘The Tonight Show’
Next Post: The One Song That John Lennon Would’ve Given His ‘Eyetooth’ To Write