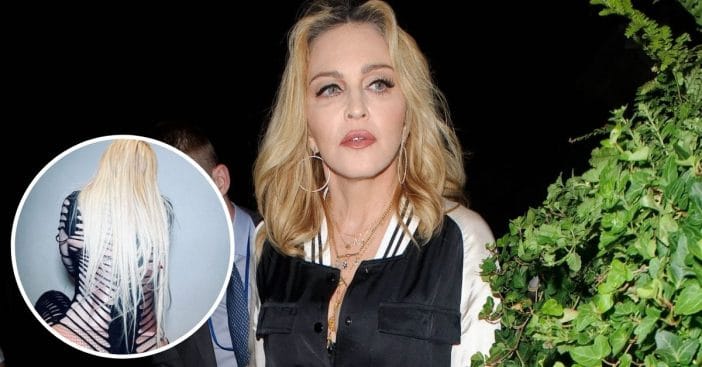 Madonna is 63 years old and she has shown that she has no shame in flaunting her goodies online for everyone to see. The singer donned some black fishnet tights, head to toe, along with a black barely-there jumpsuit. In a series of photos, she’s been promoting some new projects she’s been working on.

Her latest project that she’s been promoting is a remix of a song called “Frozen,” which came out March 3rd. She added in the caption that a music video would be coming shortly after.

Madonna shows off the goods for her followers

Obviously, Madonna’s sculpted booty was the star of the show in this series of photos, earning a lot of feedback/praise from her followers. “Who is her surgeon !! She looks so amazing!!!!!” Someone writes. Another says, “Yessss here we goooo 🔥 LET THE REMIX REVOLUTION BEGIN. Amen.” However, some people had other thoughts, more criticism.

“Is it me or does Madonna get less cool the harder she tries?” Someone writes. “She’s still hot AF but why can’t we have her going more milfie with a glass or Chardonnay? If she wants to get crazy with it, throw in a miniature horse…”

Clearly, Madonna may have had some work done, but she’s been very open up about how she stays nice and toned up, and that’s with a lot of exercise. She works with a trainer named Craig Smith, who says that Madonna trains in the gym six days a week for at least 30 minutes. “I vary the workouts every single day,” Smith tells Daily Mail Australia. “She does a combination of circuit training, interval training, and resistance training. Dance is obviously a huge part of that.”

Madonna also loves to incorporate boxing, martial arts, and yoga, but Smith added that “her favorite workout is something that’s all-inclusive of cardio… focusing on combining all the elements from upper body, lower body and core.”

In terms of her diet, she reports that she follows the macrobiotic diet, which is mostly vegetarian, but can also incorporate vegan meals with an emphasis on fruits and veggies. Since injuring herself during her 2019 Madame X tour and undergoing hip surgery, she’s also been doing physical therapy, of which she posted an update about last September.

RELATED: People Are Going Crazy Over Madonna’s Butt At The 2021 VMAs