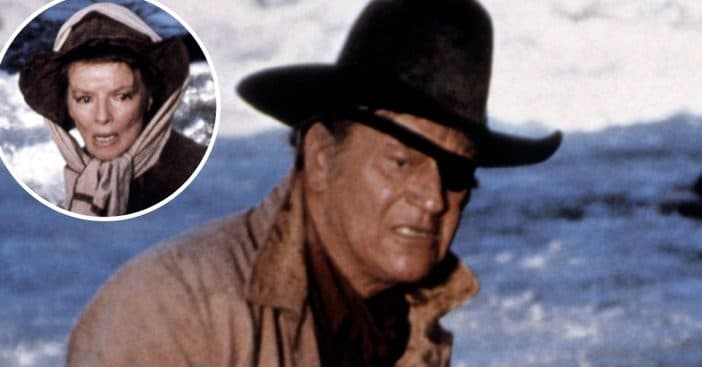 While many fans love John Wayne and his movies, it turns out he wasn’t always that popular with his fellow celebrities. In fact, there was at least one actress that refused to work with him for a long time! Eventually, she came around but she called out his behavior and asked him to change. That actress was the iconic Katharine Hepburn.

In the ‘50s, John was a Republican who would often share his political views. Of course, this led to disagreements and other people didn’t always agree or like his views. John wanted Katharine to play Angie Lowe in his western film Hondo. However, after she discovered that he supported the House Un-American Activities Committee (HUAC), she didn’t want to work with him.

In the ‘70s, she seemingly changed her mind. They worked together in the 1975 classic Rooster Cogburn. However, it doesn’t seem that all was well when they filmed the movie. After the movie was completed, Katharine spoke out about John, saying that he was always arguing with the crew and the director. She called him out during the film’s wrap party.

RELATED: John Wayne Once Had A Tantrum On The Set Of ‘Four Sons’

Reportedly, she told him, “I’m glad I didn’t know you when you had two lungs. You must have been a real b*****d. Losing a hip has mellowed me, but you!” Years later, before his death in 1979, they apparently made up and had some fun times together.

What do you think about Katharine calling out John? Sounds like a sight to see!

RELATED: Elvis Presley Turned Down John Wayne’s Offer To Star In A Western Together

Click for next Article
Previous article: David Cassidy Of ‘The Partridge Family’ Died At 67 After Decades Of Alcohol Abuse
Next Post: Stella Stevens From ‘The Poseidon Adventure’ Is Now 83 And Lives In A Care Facility