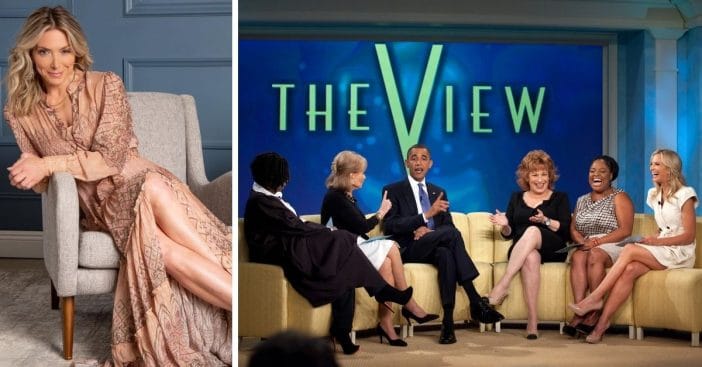 An original co-host of The View, Debbie Matenopoulos, claims that the show was never meant to be political, especially as political as it is now. Debbie spoke on the “Allison Interviews” podcast recently, saying that the show was started to “just have a bunch of women sitting around, from different generations, different backgrounds, and different views, that would talk about topics of the day.”

Needless to say, she thinks it’s gone a bit out of control. “The show has become super political now, but it wasn’t supposed to be political,” she continued. “It was just meant to be, ‘Here’s your mom, your grandmother, your aunt, your cousin, your younger sister, all sitting there chatting about the same topic.”

She continues, “And they are all going to have different ideas, because they are coming from different generations and different backgrounds.’ It was about having a fun conversation and seeing where it comes out, and for all of us to learn from one another.”

In the last few years, we’ve seen quite a few View co-hosts butt heads with one another, particularly Whoopi Goldberg, Joy Behar, and Meghan McCain, and in earlier seasons with Candace Cameron-Bure and Raven Symoné. Most recently, the conversation got so heated that it ended up in Goldberg’s two-week suspension when she said the Holocaust “wasn’t about race.”

The show was originally created by veteran journalist Barbara Walters, also including journalist Meredith Vieira, attorney Star Jones, comedian Joy Behar, and Debbie Matenopoulos, who was let go after two seasons. “Nothing like ‘The View’ ever existed before, but now you see so many imitations have come after,” Debbie says, noting how talk shows like The Talk and The Real have since surfaced onto daytime television.

“It was an experiment and something she had wanted to do for years, and she finally was at a place in her life and had enough respect at ABC that they would allow her [Walters] to do this.”

Click for next Article
Previous article: Linda Evangelista Shares First Photos Of Her Body Since Procedure That Left Her ‘Brutally Disfigured’
Next Post: How Brooke Shield Takes Care Of Her Skin In Her 50s