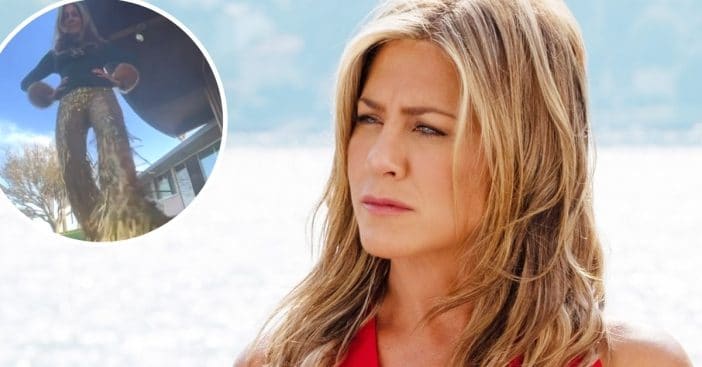 Jennifer Aniston recently celebrated her 53rd birthday and dressed in a fun outfit to honor the occasion. Jennifer shared a video of herself in gold tassel pants. She looks like she is having a good time as she smiles and shakes her foot, making the tassels move around.

Alongside the video posted to Instagram, she thanked everyone for their birthday wishes. She wrote, “Thank you all so much 🤗⁣ I’m filled with so much gratitude for all the love that poured over me on my birthday…! Blessed girl over here 🥰🥳⁣ I love you ❤️👈🏼!”

Fellow celebrities and fans kept the birthday wishes going in the comments, while others made remarks on her cool pants! Others joked about how the pants were kind of ugly. Comedian Whitney Cummings said, “Okay this is the first time I’ve ever questioned your judgement.”

Jennifer is currently filming the sequel to the Netflix film Murder Mystery with Adam Sandler. Before her birthday post, she shared a photo of herself with Adam and a video of the set of the movie. She said, “Back to work with my buddy. #MurderMystery2” This got many fans excited for the second film as the first one was a big hit on Netflix.

As of now, the plot of the sequel has not yet been released so fans will have to wait to see what it is about. It will likely be released in 2023.

Click for next Article
Previous article: At 39, Kieran Culkin From ‘Home Alone’ Is A History-Making Golden Globe Nominee
Next Post: ‘Fried Green Tomatoes’ Cast Then And Now 2022