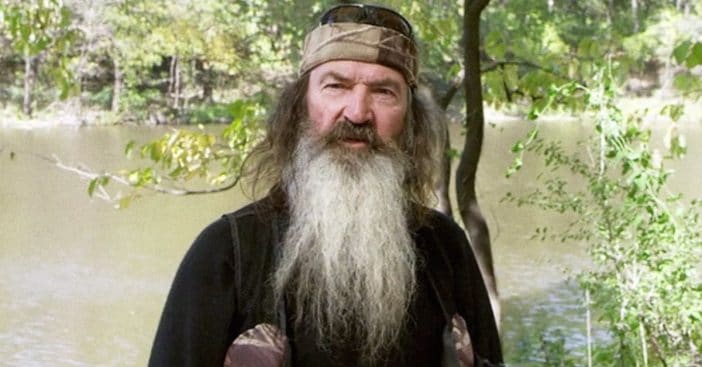 Phil Robertson, star of the show Duck Dynasty, recently opened up with his thoughts on cancel culture. Robertson is no stranger to being canceled when his show on A&E was actually canceled back in 2013 after he equated gay people with hell-bound sinners in a GQ interview.

In his new book titled Uncanceled: Finding Meaning and Peace in a Culture of Accusations, Shame, and Condemnation, he talks all about cancel culture and his Christian faith, and how both of those things can clash.

Phil Robertson on getting canceled himself, and his thoughts on cancel culture today

“The ones who attacked me, I didn’t hold it against them,” he says to Fox News Digital in a recent interview. “They asked me a question about a particular sin, homosexual behavior. And they asked if I believed it was a sin. I thought to myself, that’s a weird question to ask someone, but I just quoted a Bible verse… I quoted what God had to say about that sin and nine other sins, but it was in the list of sins… As we were doing ‘Duck Dynasty,’ the upper crowd at A&E decided to drop the ax on me without first looking into what went down.”

He was then asked, “What, in your mind, is sinful?” referring to gay people. “Start with homosexual behavior and just morph out from there. Bestiality, sleeping around with this woman and that woman and that woman and those men.” He then also paraphrased Corinthians from the Bible: “Don’t be deceived. Neither the adulterers, the idolaters, the male prostitutes, the homosexual offenders, the greedy, the drunkards, the slanderers, the swindlers – they won’t inherit the kingdom of God. Don’t deceive yourself. It’s not right.”

He had people praising him and hating him from all ends

While the suspension earned praise from gay rights groups, conservative groups argued that their beliefs and viewpoints were being overlooked by Hollywood and the media.

“They put me on what they called an indefinite hiatus,” Robertson continues. “I said, ‘I think I may be getting fired, right?’ Hiatus says you’re not part of the program anymore. After nine days they reinstated me, but we had all kinds of sponsors that just took off. They had made a mockery of what I said. All I did was quote a Bible verse. And as a result, they tried to cancel me. But it didn’t cancel me at all. I still love them. I don’t hate anyone.”

Robertson concludes and closes the book on this one, saying, “The Bible teaches us to love thy neighbor even with their mistakes.” He adds that cancel culture, as a whole, has gone too far, especially since it goes against the teachings of the Bible. “We’re all guilty of sin. We all make mistakes. Therefore, you have no excuse to pass judgment on someone else,” he says, adding, “I’m just trying to speak out about the word of God… Just forgive each other and move on for crying out loud.”

Click for next Article
Previous article: Elvis Presley Was ‘Ashamed’ Of Some Of His Movies
Next Post: Judy Landers From ‘B.J. And The Bear’ Is Now 63 And Enjoying Semi-Retirement