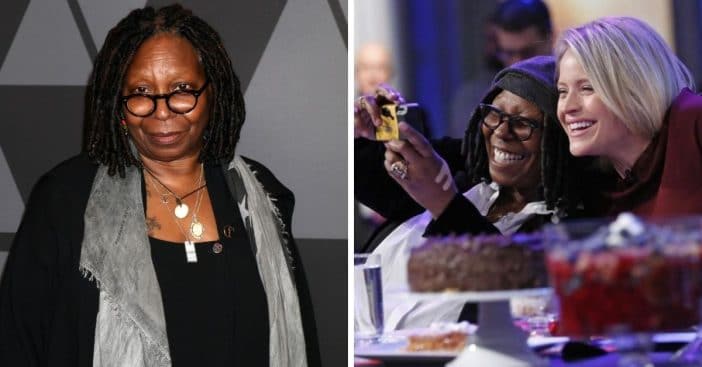 The View co-host Sara Haines went on to defend Whoopi Goldberg after trolls came after her and a throwback picture she posted. The photo was taken of them by someone else, showing the two posing together, trying to get a selfie in with a disposable camera on the set of the talk show.

While many of the comments were kindhearted, many of them were also pretty negative in light of Goldberg’s recent suspension from the show following her comments on the Holocaust.

“This just popped up and warmed my heart. That’s my Whoops!!!!” Haines captioned the photo. And only after a huge influx of negative comments, Haines also commented on the post, saying, “I’d like to invite people trolling the post to go play somewhere else. To learn from a moment is all we can ask of anyone. And prioritizing punitive measures at the expense of the message/issue (and teaching moment) are misguided.”

One of the more positive comments included, “Whoopi is being missed😢my family, friends and I will start watching the view as soon as she returns😍.” Another said, “I feel Whoopi’s suspension was a mistake. I thought people could make a mistake, learn and have important conversations. If mistakes keep happening that is a different story. Whoopi’s apology was sincere and she was willing to discuss. We all learn something new everyday. I am 71 and still learning. I believe suspension sent wrong message.”

As for the negative comments, some people simply commented, “Seriously?” Another writes, “Just wish the view would be consistent! You want to cancel everyone else who messes up but not your own!! Y’all literally want Joe Rogan to be canceled for talking about Covid and what you think was misinformation. What Whoopi said was off the chart wrong compared!! She should have to leave! Rules are rules!!!”

Click for next Article
Previous article: The Who Will Play In Cincinnati For First Time Since ‘79 Stampede
Next Post: Meghan McCain Shares Cutest Photo Of Daughter Liberty In Velour Jumpsuit