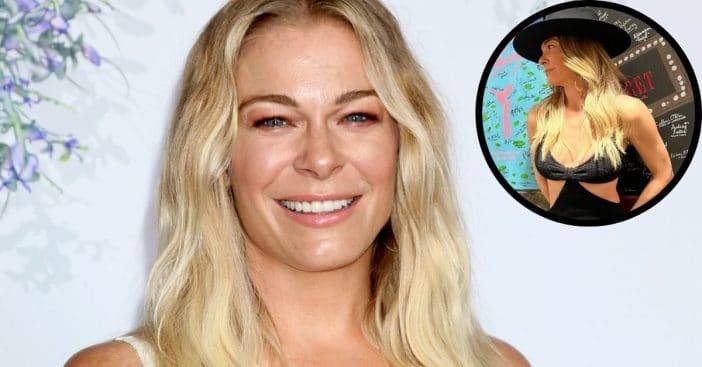 The little black evening dress is an essential part of any closet when a night out can find its way to a person’s calendar. Country music star LeAnn Rimes showed off one of the most sizzling examples of this outfit in an Instagram post from her first show of 2022.

Rimes has had a busy last few weeks after an opening performance for the Rose Parade and is preparing for her upcoming album God’s Work. In the meantime, there are more concerts to be had and Rimes has provided some looks backstage to give her 727k followers even more to look forward to.

On January 10, Rimes shared a set of backstage photos to her social media. Each shows her leaning beside a colorful wall of famous musical programs. She is seen wearing a wide-brimmed hat over a form-fitting black dress that is tight at the hips and open at the sides with a top almost akin to a bathing suit.

RELATED: LeAnn Rimes Has Struggled With Psoriasis Since She Was Two-Years-Old

“Backstage or Broadway,” she captioned, accompanied by the iconic happy and sad masks of theater actors. “Thank you to everyone that came out to our first shows of 2022!” She called the energy of that occasion fiery and finished with the tags, “#behindthescenes #wereback #lrlive2022.”

Rimes has famously maintained a busy schedule for herself over the years. She promotes her own candle line, La Fréquence Candles. She’s also served as a judge on the Discovery+ series Meet Your Makers Showdown, which pits artisans against one another in a competition of creativity. Back on a personal note, Rimes herself also fuels inspiration through her motivational podcast Wholly Human.

She also provided a captivating performance for the 133rd Rose Parade with the song “Throw My Arms Around the World,” an original song for the special occasion. The event experienced some technical difficulties and mixed responses that were noted by viewers on social media, including an invasive echo and the jarring imagery of embracing the world followed by bomber jets flying over the venue, but others consider her opening the best start to the parade yet. Did you watch the event?