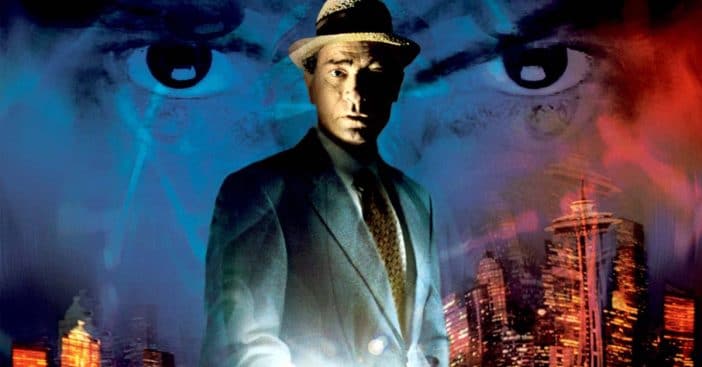 It was 50 years ago today that actor Darren McGavin — popularly known for his role as “The Old Man” in A Christmas Story — introduced the world to down-on-his-luck reporter Carl Kolchak, who investigates a series of Las Vegas murders that turns out to be the handiwork of a vampire in the 1972 TV movie The Night Stalker. So popular was Kolchak that he returned the following year in the TV movie The Night Strangler and the year after that in the weekly series, Kolchak: The Night Stalker. Today, the cult of Kolchak remains strong, with rumors of a new version and the intrepid reporter’s adventures continuing in new novels, short stories, and comic books.

Back in the early 1970s, ABC launched the Movie of the Week, which became a means for the network to produce a series of original movies that would allow them to break free of only airing theatrical films. Michael McKenna, author of the book The ABC Movie of the Week: Big Movies for the Small Screen, points out, “It isn’t long before TV movies become a consistent moneymaker and ratings grabber, and it starts to become a genre for all the networks, some sooner than later. The other thing about the TV movie is that it gave people who were in regular-running TV series something of a second career. You always see the most familiar faces on television, because they are recognizable. You know, the audience watches a clip and they say, ‘Oh, Lou Grant is in a TV movie. I’m going to watch that.'”

As it turns out, the movie of the week and Darren McGavin were a perfect match. “Darren McGavin made some really remarkable movies of the week,” states McKenna. “First of all, he’s in The Night Stalker and The Night Strangler as reporter Carl Kolchak who goes up against a vampire. In another movie called Tribes, he plays a drill instructor and Jan Michael Vincent is a hippie who ends up being drafted and sent to Marine boot camp. It’s really good, because it gets into the generation gap and the culture of the time. But then Darren McGavin is also in the original Six Million Dollar Man movie and he’s the sergeant in The Rookies, which also goes to series. On top of that, in a movie called The Challenge he plays some type of mercenary who has single warrior combat on an island to decide some Cold War dispute. So he’s got a fairly remarkable career on The Movie of the Week.”

There is no question that Darren McGavin created a wide variety of characters over the course of his career, many of them memorable. As noted earlier, “The Old Man” in A Christmas Story is a good example. But there are certain roles that actors seem to have been born to play and the thing is, no matter what else they do, they will always be remembered for that part. Sean Connery had James Bond, Christopher Reeve had Superman and McGavin had reporter Carl Kolchak. Based on a then-unpublished novel by Jeff Rice, The Night Stalker — which shattered rating records at the time — was written by Richard Matheson and directed by John Llewellyn Moxey.

As Rice explained in an exclusive interview, all of this sprang from what was originally called The Kolchak Papers, and it was the first attempt at blending the newsroom and horror fiction genres. “That wasn’t my main consideration when I started the actually drafting,” he said. “All I wanted to do was create a ‘good read’ of the type that I thought I would find entertaining; something for people to use to kill time in airports, on planes, or in hotels when stuck overnight in a strange town. Of course, I also felt I could use the book as a vehicle to say a few serious things about my town — to use it as an intrinsic part of the story rather than as a mere background setting — and to make a few pithy comments about the misuse of power, the latter being an underlying theme in the novel.”

In The Night Stalker, Kolchak is the sole believer of a vampire on the loose in Vegas against a world of skeptics, and it’s his battle to get the truth out despite the odds that made viewers root for him. But while audiences always cheer those who endure ridicule and worse in their fight against conventional wisdom — be it Galileo or the 1969 Mets — that isn’t the only source of the concept’s enduring popularity. “Maybe its appeal remains because it was then, and remains now, a very different kind of show,” Rice suggested. “Maybe people see, in the monsters and the way public knowledge and discussion are stopped, symbols for all those things various government entities wish the people not to know about. Maybe people — fans — admire Kolchak because he just keeps on trying to do what he sees as work that has value; trying to keep the public informed about what is going on.”

All true. But then there was the addition into the mix of McGavin. Author Mark Dawidziak, who was friends with both Rice and McGavin, points out, “If you were to read Jeff’s original book, you would not picture Darren McGavin as the character. The book Kolchak was more hulking; based on a reporter Jeff had known in Las Vegas. And when the script was written by Richard Matheson, again you would not have necessarily pictured Darren McGavin. But then when Darren comes in, it’s the perfect fusion of actor and part, with the actor making the part completely his own. You know, I don’t think it’s any mistake that two of the characters I’ve written books about are Columbo and Kolchak.”

“They have a lot of similarities,” he continues, speaking of the detective famously brought to life by Peter Falk. “They’re both shabbily dressed, sons of immigrants with European surnames who drive dilapidated cars and get there through sheer determination. And in our minds, these characters were brought to life in a way we can never imagine any other actors in the roles. With Columbo, Richard Levinson and William Link did not picture a younger actor looking like Peter Falk playing the part. They pictured an older Irish actor. And the same thing happens with Kolchak in that Darren shows up, Darren looks at it and says, ‘This is the motivation for this, this is how the character would dress.’ Darren was the one who put him in the seersucker suit; he came up with the hat and the sneakers, he’s the one who came up with the reporter’s tie, because he remembered that’s what reporters wore in New York in the summer when he was an actor there.”

In the pages of Dawidziak’s The Night Stalker Companion, McGavin himself explained, “In the first draft of the script, Kolchak was wearing Bermuda shorts, socks and brown shoes, a Hawaiian shirt and a golf cap. Apparently, somebody thought that was the uniform for a newspaperman in Las Vegas. But there was a line in there about him wanting to get back to New York, so I got this image of a New York newspaperman who had been fired in the summer of 1962 when he was wearing a seersucker suit, his straw hat, button-down Brooks Brothers shirt, and reporter’s tie, and he hasn’t bought any clothes since. Well, I knew that was the summer uniform of reporters in New York of that time, so that’s how the wardrobe came about. I added the white tennis shoes and that was Kolchak. It might have been totally at odds with what everybody else was wearing in Las Vegas, but he hasn’t bought any clothes since then. You need goals for a character and Kolchak’s goal is to get back to the big time. He always wanted to get back to New York and work on the Daily News.”

McGavin, Dawidziak says, essentially merged his own personality with that of Kolchak’s. “As a result,” he points out, “it has bits and pieces of Jeff, it has all of the essential DNA of Jeff’s character, but is now a Kolchak who is unforgettable, because of this. So what Darren brought to the part is just incalculable. Kolchak is an incredibly watchable, vibrant character even in the lousiest episodes of the series, and that’s because of Darren. Darren always was able to make that character stand up and dance. It’s like the later Columbo episodes; some of them were not very well written, but it was always a kick to see Peter in that raincoat. Well, it was a kick to see Darren in that seersucker suit.

“I remember a story that was told about, of all people, Jack Dempsey, and long after he’d been heavyweight champion,” says Dawidziak. “When he was in his 40’s and 50’s, he would do boxing exhibitions and people would just line up to see Dempsey in the boxing ring. You know, he was not fighting for any title. He was long past his prime, but just to be able to tell the grandchildren they saw Jack Dempsey in a ring with boxing gloves on was pretty darn special. It’s kind of a crazy comparison to me, but anytime Peter put on that raincoat, it was like Dempsey putting on the gloves. Any time Darren was in the seersucker suit, it was like Dempsey putting on the gloves.”

Raise a glass — of champagne, wine … blood — to the memory of The Night Stalker. Happy Anniversary, Carl!