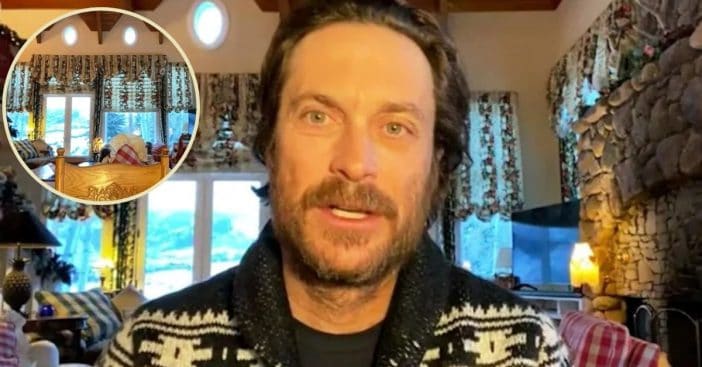 Oliver Hudson appeared on Live with Kelly and Ryan to showcase his mom Goldie Hawn’s and Kurt Russell’s home in Aspen, CO, where they had been staying for the recent holiday. Hawn and Russell have apparently owned this house for decades. Appearing in a video call from the house, Hudson said, “Mom built this house first and then my step-dad Kurt built the other house. So we lived here in 1985 for two years.”

Both Hawn and Russell make an annual trip to the Aspen home every winter, along with the rest of the family, including Hawn’s daughter Kate Hudson. Just last month, Hawn and Russell were spotted doing some last-minute Christmas shopping in the area.

Oliver Hudson is proud of the Aspen, CO home… and 30-year-old curtains!

Joining Hudson during the trip was his wife, Erinn Bartlett, plus his sister, Kate, Kate’s fiancé, Danny Fujikawa, and their daughter, Rani Rose. He adds about the home, “It’s a bit of a time capsule. Those curtains that you see are like 30 years old, you know what I mean? Mom refuses to update, which kind of is great.” He went on to say that Aspen is a special place for their family, who have been visiting the area for around 37 years or so.

“I went to elementary school up here,” Hudson says. “I actually took my kids out of school five years ago in L.A. and took them up here to live in the mountains and have some independence and some freedom. It’s a really special place for sure.”

He adds that some of the best parts of Aspen are the snow days and access to ski mountains. “That was the greatest thing about being here, snow days. Wednesdays they let off early so everyone can go ski… The school system is so different. My kid had, in 5th grade, a page of homework front and back that was given on Monday and due on Friday. That was it. They believe in sort of go home, play in the snow, be in the mountains. That’s sort of their philosophy here.”

When able to, Hudson and his wife both make the best of their time there by getting in some time on the slopes. “My wife was on a ski team [and] she grew up in Massachusetts. She was basically skiing on sheets of ice,” he says. “I’ve been skiing since I was five. I’m pretty good. I can ski anything. I’m 45 years old now, things have changed. I don’t do what I do. I ski fast but I don’t go crazy and jump off cliffs and things like that. I used to be pretty crazy.”