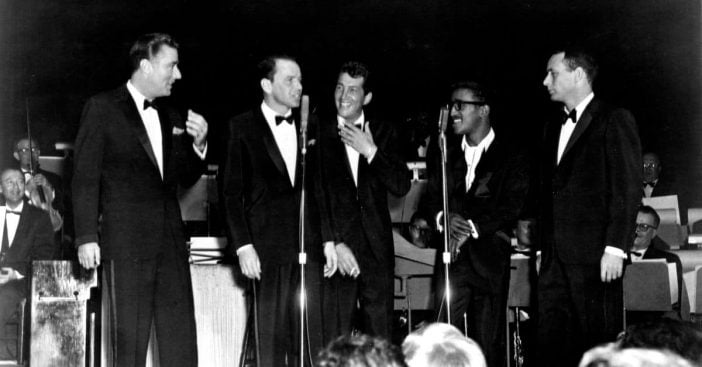 Richard A. Lertzman, co-author of the new book Deconstructing the Rat Pack delves into the destruction of the Rat Pack (Frank Sinatra, Dean Martin, Sammy Davis Jr., Peter Lawford, and Joey Bishop). It was February 1960, and Sinatra was fading out. He knew he needed a little extra something to beat out the likes of Elvis and the newest Beatles.

“Frank 100 percent knew that his window was closing. He needed something big,” Lertzman says. “Before the Rat Pack’s arrival, Vegas was all Jimmy Durante and Cyd Charisse — old hat.” Well, Sands casino publicist Al Freeman, was looking to catapult Vegas into something brand new, something much bigger than what it was.

The Rat Pack comes to life

He continues, “Al wanted a mega-act to put Vegas on the map. Frank loved the idea and started assembling a group. He had done the movie ‘Some Came Running’ with Dean Martin and thought it would be good to work with him again. Sammy Davis Jr. had just lost an eye in a car accident and Frank wanted to back him. Then he needed a journeyman comic who would not suck air out of the room: In came Joey Bishop. Peter Lawford was married to Patricia Kennedy, and Sinatra was drawn to the Kennedy family’s power.”

So, what ended up happening, later on, is that JFK announced his presidential run, and then associating with the Rat Pack made him look that much cooler. It additionally helped in funding JFK’s campaign.

The Kennedys take over

“Joe Kennedy [JFK’s father] promised the mob guys who ran Vegas that John would protect them in exchange for a $1 million contribution,” Lertzman says. “A satchel with $1 million was left in the suite of Carl Cohen [a mobster who was president of the Sands] for John to pick up and hand off to Joe. JFK was the bag man! Lawford brought Sammy to see [the bag]. Sammy started telling everybody.”

Over that next year, the Rat Pack began publicly supporting JFK’s campaign, even supporting him at the Democratic National Convention, and were also to headline his inauguration party. But there was trouble looming. According to NY Post, “Bishop hosted and Sinatra sang, but Davis was barred because Joe Kennedy feared racist blowback from Davis’ engagement to Swedish actress May Britt. Martin bailed, which created bad blood between him and Sinatra.”

All things must come to an end

The NY Post goes on to reveal that “Bishop was frozen out after he was asked to fill in for Sinatra at a gig and tried strong-arming Sinatra for $50,000. Then, Joe Kennedy put the kibosh on his son visiting Sinatra at the singer’s Palm Springs home — where a heliport had been built especially for the president — due to Sinatra’s increasingly public mob associations. Lawford was forced to break the bad news, which pretty much killed off the already hobbled Rat Pack.”

So, while the Rat Pack is deemed so legendary for that time period, it seems like there might have been a lot of dormant tension there, just waiting to come out. And it did, thanks to the Kennedys.