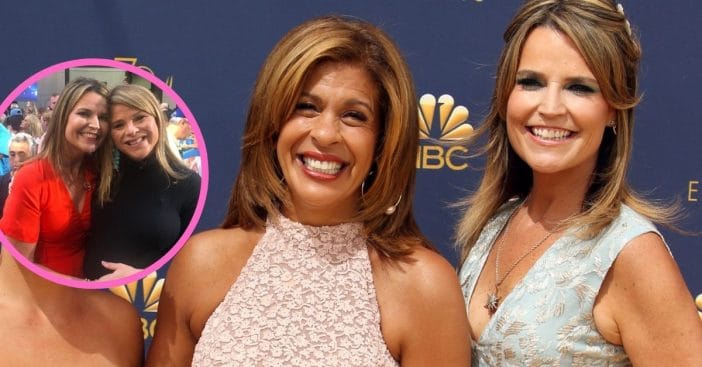 The Today family includes members that maintain a strong presence on our televisions and in each other’s hearts even outside of the studio. As both colleagues and friends, Jenna Bush Hager and Hoda Kotb – along with many Today peers took to social media to pay tribute to Savannah Guthrie on the very special occasion of her 50th birthday.

Guthrie was born on December 27, 1971 and co-anchor of Today’s third hour alongside Al Roker and Natalie Morales in 2011. By 2012, she moved on to become a co-anchor of Today, a role she maintains today alongside hosting the Macy’s Thanksgiving Day Parade on NBC along with the Rockefeller Christmas tree lighting.

On Monday, December 27, Hoda, Jenna, and many members of the Today family took to social media to wish Guthrie a happy birthday at 50. On Instagram, Hoda shared a picture of the two of them side-by-side all smiles for the cover of the Fly Washington magazine. “Happy 50th my sweet,” Hoda wrote. “Love to see you soar.”

That same day, Jenna also posted an image of her and Guthrie to Instagram, this one featuring the two of them grinning on stage. Viewers can see what a throwback photo this is by the different hairstyles both women sport; they look almost unrecognizable with both sporting short hair. “My sister-wife, devoted friend, litigator of all things literally, dog-sweater-wearing, enthusiastic partier until 9pm turns 5-0 today,” she wrote in the post’s caption. “@savannahguthrie deserves to be celebrated for her dedication to her family and friends, her loyal heart, and her relentless faith. Sometimes life surprises you with a dear friend who loves you for all of you—what a wonder it is to be in your glow SG.” Several other sentimental photos accompany the first.

Today is a special day

Food blogger Siri Daly also had reason to celebrate Savannah Guthrie’s 50th birthday. Six years ago, she married Today host Carson Daly, though their relationship extended years before their engagement in 2013, and Siri is a huge part of the Today family. In fact, there’s a whole segment dedicated to Guthrie’s love for Siri’s Cookies, to use their official name as outlined on the whiteboard of Guthrie when she makes them for her family. Siri also posted a sentimental tribute to Instagram, writing, “From the moment our bellies touched seven plus years ago, it was like we had always been friends.” The photo shows the two women bumping belly bumps. Recalling all they’ve been through together, Siri concludes, “it’s all better with you. Happy Birthday to a magical human… 50 looks gorgeous on you.”

Her colleague Al Roker joined in on the festivities with photos of his own outlining his time with Guthrie both as coworkers and as friends, all of them featuring smiles whether they’re tackling the topics of a particular day or enjoying some swimming together. Roker’s caption declares him “so thrilled” by the occasion and he adds that he “can’t wait to see what the next 50 bring.” He concludes with his own nickname for her, Savvie G.

Click for next Article
Previous article: 100-Year-Old Man Who’s Eaten Wheaties For Decades Is Now On The Box
Next Post: UK Tabloid Apologizes To Meghan Markle After Losing Lawsuit To Her