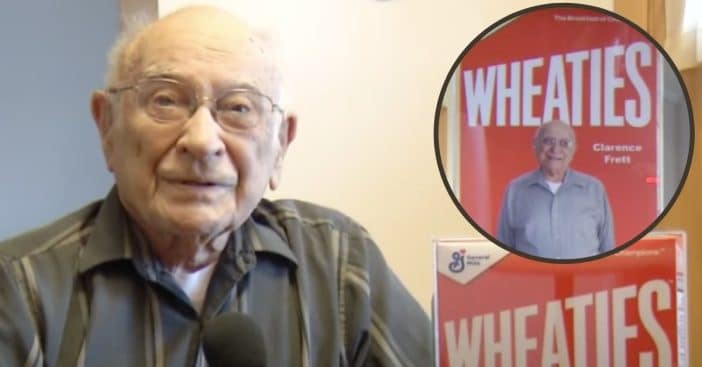 100-year-old Clarence Frett has been eating a bowl of Wheaties every morning for breakfast, and now, he’s on the box. He’s actually been eating the same cereal since he was in the Coast Guard in World War II.

Clarence has eaten Wheaties for decades and now, he’s the face of the brand

Turns out, Wheaties is actually 100 years old, too, so the brand has that in common with Frett. That’s when his daughter Renee sent an email to General Mills to see if she could get her dad’s face on a Wheaties box. And they actually came through!

“I was really surprised,” Frett said. “I’m going to have a lot of fun with it that’s for sure.”

Frett has quite the background in life. He was a barber, and started cutting hair while in the Coast Guard and just never stopped. He went on to Frett Barber Shop on 10th street in Marion in 1949 and continued cutting hair until he was 88 years old. The shop is now run by his daughters.

“Carrying on the tradition almost in Marion, an old fashion barbershop, what he started and what he worked hard for,” says daughter Renee. “It is quite an honor it really is.”

So, what is Frett’s secret to living a long life and continuing to feel young? In addition to eating his morning Wheaties, he also says all the great friends he’s made through being a barber plays a big role in that, too. “Meeting all the people and talking to them,” Frett said. “I really enjoyed being a barber.” Renee chimes in, “He’s very healthy and active. He is mentally sharp, so we will just keep him busy and eating Wheaties!”
Click for next Article
Previous article: Frank Gorshin, The Original Riddler On ‘Batman,’ Performed Until His Death In 2005
Next Post: Jenna Bush Hager, Hoda Kotb Wish Savannah Guthrie Happy 50th Birthday With Unrecognizable Throwback Photos