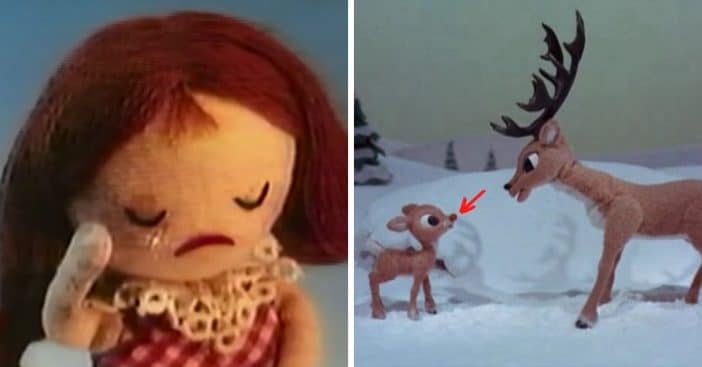 Rudolph the Red-Nosed Reindeer has gone on to become one of the most timeless classics in Christmas movie history. There’s nothing better than turning on your TV, watching it live on cable (or streaming it on one of your favorite streaming services), kicking your legs up with a cup of hot cocoa… and then you realize…

This movie has a lot of weird, sick, and downright twisted underlying themes! We’re breaking down all of the messed up things we’ve seen in Rudolph the Red-Nosed Reindeer since growing up… have you noticed any of them?

1. Rudolph is only loved once he proves to be valuable

Alright, we’ll start off with the biggest one. Everyone bullies Rudolph for having a red nose and looking different than the other reindeer… even his own parents go to extremes to cover up Rudolph’s nose from his peers. But once they realize it was a cover-up, they start making fun of him. Even Santa doesn’t necessarily stop the teasing and bullying, effectively making him an accessory to it and allowing it. But, at the end of the movie, when the weather is so bad they have to reconsider Christmas, they all realize that Rudolph can help them because his nose can light the way. Now, that’s a bit messed up if you ask me.

RELATED: 5 Classic Christmas Traditions We’re Glad Are Dying Out (& 5 We Want To Save)

2. Donner is ashamed of his own son

We briefly touched on this in #1, but it’s worth noting again. Donner, Rudolph’s dad, goes to great lengths to cover Rudolph’s nose because he’s ashamed of having a son who looks different than the other reindeer.

3. Santa has… an anxiety disorder?

It’s no secret that children everywhere are stunned when they watch the movie and are met with a skinny Santa (and Mrs. Claus goes to great lengths to fatten him up, too). With the impending inclement weather, having to make tons of toys and deliver them to millions and millions of children, and many more pressures, Santa can’t seem to work up an appetite as he’s worrying so much. Rudolph also isn’t the only movie to touch on Santa’s mental health problems. In The Year Without a Santa Claus, Santa is so beaten down from the pressures of Christmas that he nearly quits. Yikes.

Yeah, there’s a lot of mental health stuff going on in this film. Dolly reigns from The Island of Misfit Toys, and as we can see, there’s a lot of misfit toys—there’s even a cowboy that rides an ostrich, which obviously doesn’t make sense. But even so, that shows there must’ve been some pretty harsh kids back in the mid-’60s. However, in a 2005 interview, producer Arthur Rankin Jr. confirmed what we had long been suspecting about Dolly. She looked perfectly normal, why was she on an island for misfit toys? That’s because her “problem” wasn’t something physical.

After being abandoned by the girl who owned her, Dolly fell into a very severe depression. Now, let’s make it even worse. In the 2014 graphic novel Island of Misfit Toys, it’s revealed that Dolly wasn’t even abandoned purposely—she was lost when her owner, Sue, moved, and Dolly was taken to the island where Sue could never find her. That’s why part of her vocals in the song says, “A Dolly for Sue.” She’s referencing both herself and her previous owner. So sad.

I don’t think any of us can forget the first time we saw Yukon Cornelius lick his pick-ax and wondered why on Earth he would be doing that. That’s because the scene that actually explains why he’s doing that was left out of the final cut for TV stations. In the missing scene, it’s explained that Yukon licks his pick-ax to look for a peppermint mine. It’s revealed to viewers when he actually manages to find a vein of peppermint right outside Santa’s castle. Instead of CBS keeping that scene in, they removed it so they could have time to show Santa promising the misfit toys a new home. That’s a bit more important, I think…

Will you be watching out for all of these little quirks and nuances in Rudolph the Red-Nosed Reindeer this year?

Click for next Article
Previous article: Jeannine Riley From ‘Petticoat Junction’ Is Now 81 And Wrote A Manual For Success At Any Age
Next Post: Goldie Hawn And Kurt Russell Spotted Rocking Funky Cowboy Hats