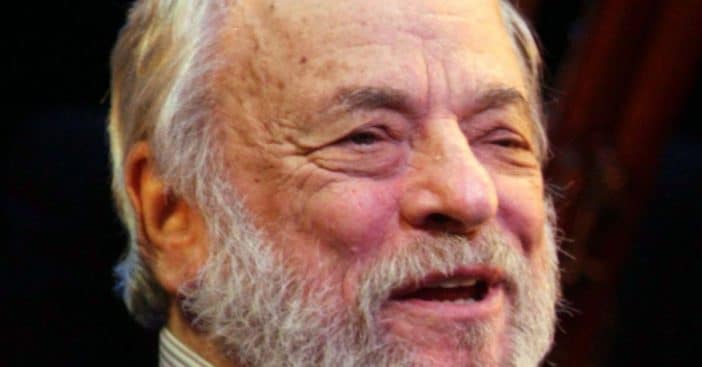 News recently came out that Broadway composer Stephen Sondheim had passed away at 91 years old. Stephen was best known for co-creating some of Broadway’s most famous shows including West Side Story, Sweeney Todd, and Into the Woods. All of these have become movies as well.

Stephen’s career spanned for over 60 years, so naturally many stars have crossed paths with him. Tributes began pouring in when the news broke that he had sadly passed away. Reportedly, Stephen had celebrated Thanksgiving with friends the day before he died.

Lin Manuel Miranda, the actor best known for creating the insanely popular Broadway musical Hamilton, tweeted, “Future historians: Stephen Sondheim was real. Yes, he wrote Tony & Maria AND Sweeney Todd AND Bobby AND George & Dot AND Fosca AND countless more. Some may theorize Shakespeare’s works were by committee but Steve was real & he was here & he laughed SO loud at shows & we loved him.”

He added, “& last week, when I wrote him to say his ears must be burning from the countless Sondheim kindnesses being shared from the generations of writers he mentored, he wrote this in reply. Steve: you repaid your debt to Oscar 1000 times over. We love you. I love you. THANK YOU. -LMM.”

Barbra Streisand shared, “Thank the Lord that Sondheim lived to be 91 years old so he had the time to write such wonderful music and GREAT lyrics! May he Rest In Peace.” While actor Hugh Jackman said, “Every so often someone comes along that fundamentally shifts an entire art form. Stephen Sondheim was one of those. As millions mourn his passing I also want to express my gratitude for all he has given to me and so many more. Sending my love to his nearest and dearest.”

Stephen received Tony awards and a Pulitzer for his work on Broadway. He also received the Kennedy Center Honors for lifetime achievement and the Presidential Medal of Freedom. Sending our condolences to Stephen’s family and friends. He truly was an icon.

Click for next Article
Previous article: See First Glimpse Of Harry Connick Jr. Gone Bald As Daddy Warbucks In The New ‘Annie’
Next Post: Santa Shortage: Will It Be Harder For Kids To Meet Kris Kringle This Year?