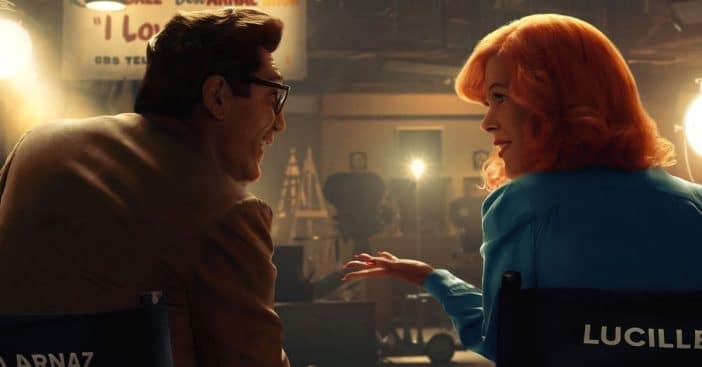 Being the Ricardos, the film about Lucille Ball and Desi Arnaz, comes out on Dec. 10. With the premiere rapidly approaching, the first full trailer has been released. Fans are having mixed reactions to seeing Nicole Kidman as Lucille in the new movie.

The trailer also shows Javier Bardem as Desi. The movie was written and directed by Aaron Sorkin and focuses on one week in the filming of I Love Lucy. It details the troubles between the couple. Their daughter, Lucie Arnaz, helped with the film to make it as accurate as possible.

Fans have mixed reactions to the ‘Being the Ricardos’ trailer

One person tweeted, “Legit emotional at the #BeingTheRicardos trailer. Looks like a fantastic picture. P.S. I’ve been a Lucille Ball superfan since I was seven and I can confirm that Nicole Kidman looks and sounds fantastic as does Javier Bardem and the entire cast Star-struck I’m gonna be a wreck Dec. 10.”

RELATED: ‘Being The Ricardos’ Star Nicole Kidman Transforms To Promote Her Next Project

Others were not impressed by the casting choice, which Lucie said she stands by. Another fan tweeted, “Idk how I feel about this Lucille Ball casting cuz she had an incredibly expressive face, and Nicole Kidman doesn’t really have that same facial range.”

Lucie previously shared that people should realize that Nicole is portraying Lucille, not her character Lucy. She isn’t doing any of the silly things that Lucy did on the show in the film. She added, “There will be humor in the film, but it is a story of the two of them and how they met and what went right with finding the show, what went wrong, their relationship, their love affair.”