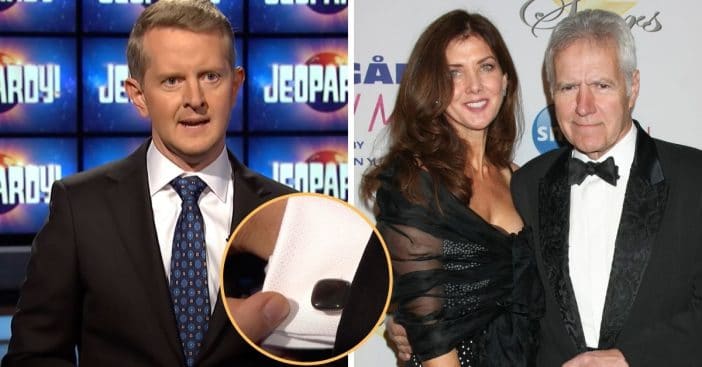 One year after Alex Trebek’s passing, Jeopardy! champ Ken Jennings remembers the heartwarming gift that Trebek’s widow, Jean, gave him. In a new promo video, Jennings reflects on how much he misses Trebek. “When I’m in here, I feel like he’s probably in the building somewhere,” Jennings shares.

“The first day I came in to guest host was just a few weeks after Alex had passed. And it was a really rough time. I got to the studio and one of the producers handed me a little box,” Jennings begins to share about the touching gift in question.

Ken Jennings reflects on the gift Jean Trebek gave him

It turns out that Jean had given Jennings a pair of Trebek’s cuff links that he had worn on the show. “What a lovely gesture that was from Jean,” Jennings says in the video. “You know, at a time that was very hard for her family, dealing with a lot of grief and a lot of challenges, she thought about Jeopardy! And she thought about me. A person she had never even met. And I thought, ‘What a lovely thing to do.’ She’s fantastic.”

RELATED: Jean Trebek Was Unaware How Beloved ‘Jeopardy!’ Star Was Until His Cancer Battle

“My Alex Trebek cuff links are the only cuff links that I own. They’re kind of a good luck charm for me here,” he adds. The champion admits that he was terrified to replace Trebek on the show. “I was just terrified, and I think rightfully so. I mean, Alex had just barely passed, and really no one else ad hosted the show since 1974… You’re trying to step into the shoes of Alex Trebek. Which is impossible.”

What fans will be delighted to know is that Jennings wore the cuff links gifted to him from Jean for the one-year anniversary of Trebek’s death, during that specific episode. And even one year after Trebek left this world, he still stays close to Jennings these days. “You can’t stand on that stage and say those things without thinking about him. Every time I’m up there, I’m doing Alex. Not just because he perfected it, but because that’s the only way I’ve ever seen it done.”

Click for next Article
Previous article: Inside The 45-Year Marriage Of Golden Age Actor Sidney Poitier And Joanna Shimkus
Next Post: Mayim Bialik Remembers “Lover Of Life” Alex Trebek One Year After Death