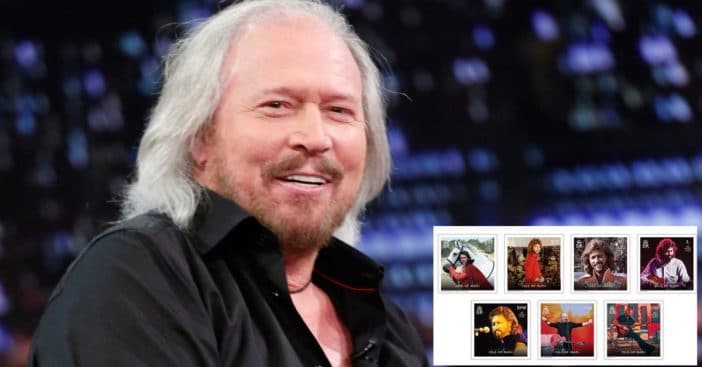 Barry Gibb is the last remaining member of the Bee Gees. He continues to be an icon in the music world and just had passed another important milestone. He had postage stamps made in his honor! The Isle of Man Post Office shared a photo of their new stamps featuring Barry.

Barry was actually born on The Isle of Man, an island between Great Britain and Northern Ireland. Barry was very excited about the stamps and called it a great honor. He shared, “I’m very proud of my Manx roots. I was born and bred on the ancient, mystical, magical Isle of Man, and I have very fond memories of growing up there, so to appear on a set of its stamps is not only a wonderful surprise, but also an honor and a privilege.”

There are postage stamps of Barry Gibb

Barry and his family moved away when he was 9 years old, but he remains proud of the island. Not only do the postage stamps honor Barry but they help to bring attention to other important causes. Years ago The Bee Gees donated their “Too Much Heaven” copyright to the UNICEF organization. Barry also supports Prince’s Trust, the Diabetes Research Institute, Whatever It Takes, the National Association of Police Athletic/Activities League, and Nordoff Robbins.

RELATED: Barry Gibb Of The Bee Gees Once Said Fame Can Destroy You

Will you try to get your hands on these stamps?