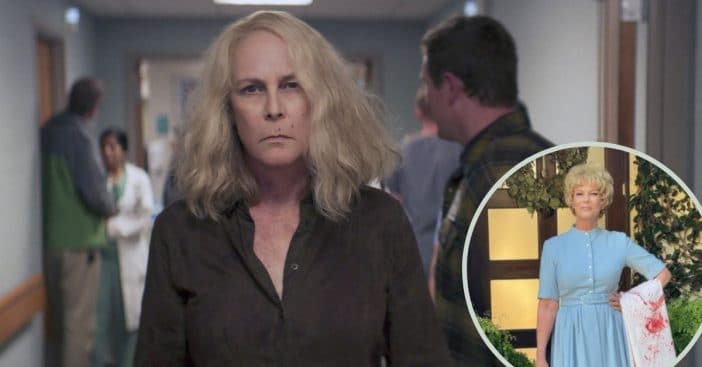 Jamie Lee Curtis honored her late mother during the premiere of her new movie Halloween Kills. The movie premiere coordinators asked attendees to wear costumes to the event and Jamie Lee did not disappoint! She wore her mother, Janet Leigh’s costume from the movie Psycho when she played Marion Crane.

She wore a blue button-up dress with black heels and a black bag. Jamie Lee also wore a short blonde wig and carried around a blood-stained shower curtain. She shared a photo of herself on Instagram before the premiere and wrote, “Honoring my mother in ALL her gory…I meant glory! PREMIERE PARTY TIME!”

She shared at the premiere, “I am honoring my beautiful late mama, Janet Leigh, but… it’s a little more meta than that. I am actually going as Scarlett Johansson as Janet Leigh in the movie ‘Hitchcock.’ So it’s meta because we never knew what color Janet Leigh’s dress was because it was a black-and-white movie.” Jamie Lee also said she brought the bloody shower curtain so people would know who she was immediately!

When asked how to get fake blood out of something, she said dish soap works wonders. Good to know with Halloween coming up! Halloween Kills is now out in theaters and on the streaming service Peacock. Jamie Lee has been portraying Laurie Strode for decades and the franchise is about to come to an end.

Watch the trailer for Halloween Kills below:

Click for next Article
Previous article: 91-Year-Old Clint Eastwood At Risk Of Being Canceled For Comments He Made In 1973
Next Post: George Clooney Knows He Was Awful At Playing ‘Batman’ In the ’90s