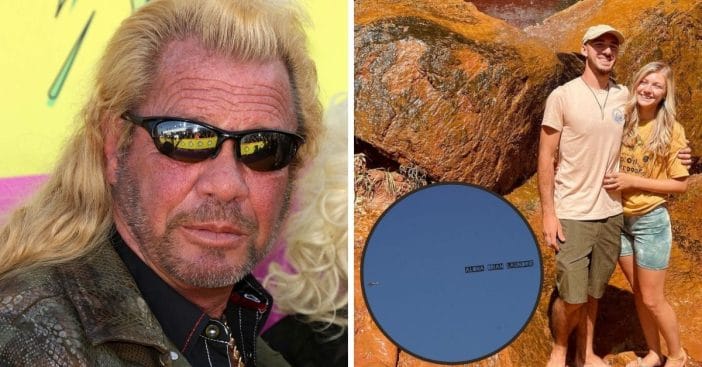 A photo recently went viral showing a plane flying a banner that read, “Aloha Brian Laundrie – Dog” and now Dog is responding to it. Well, he wasn’t actually responsible for that banner and had nothing to do with it.

“Frankly, I wish I had thought of that, but it wasn’t our team,” Dog says. “I’d love to shake the hand of whoever is behind the banner, I’ll tell you that.” Dog and his team have been on the search for Brian Laundrie and have been following leads from his anonymous tipline that he set up. While his involvement has been met with a little bit of side-eye and some Internet memes, too, Gabby Petito’s family say they “welcome any help.”

“Frankly, I wish I had thought of that, but it wasn’t our team,” joked Dog. “I’d love to shake the hand of whoever is behind the banner, I’ll tell you that.” pic.twitter.com/R8SVheG1jM

There’s been a lot of work done into the search for Laundrie. Dog recently stated that he had a huge possible lead at a campground with footage showing the family physically at the campground, with additional evidence that they were registered here. Lawyer Steven Bertolino has been making statements on behalf of Laundrie’s family, who has yet to make a statement on their own. A recent statement confirmed that Laundrie had also been making purchases with his credit card as he’s been on the run.

Recently, the FBI also showed up at his family’s home and removed evidence, and searched his RV camper. Laundrie has not been seen since September 14th.

Click for next Article
Previous article: ‘Old Yeller’ Child Star Tommy Kirk Dies At 79
Next Post: Donny Osmond Shares Rare Photo With All His Sons Together