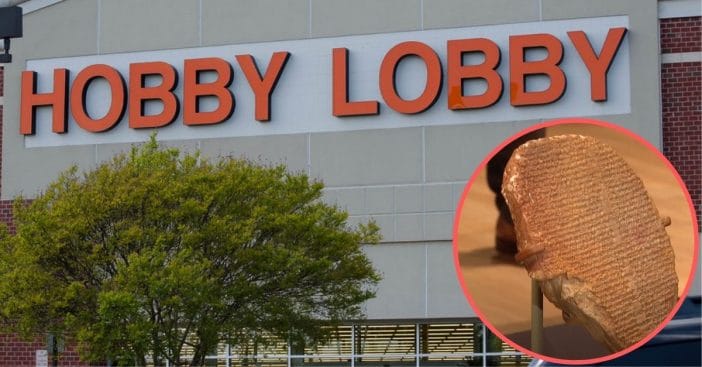 A 3,500-year-old clay tablet that was looted from an Iraqi museum and then purchased by Hobby Lobby 18 years ago is finally returning back to its rightful home. The clay tablet is also known as the Gilgamesh Dream tablet and is valued at $1.7 million. It was discovered in 1853 in the ruins of the Assyrian King Assur Banipal’s library that dates back to ancient Mesopotamia.

After being looted 30 years ago from the Iraqi museum, officials believe it was then transported illegally to the U.S. in 2003 and sold to Hobby Lobby. It was later displayed at the Museum of the Bible in Washington D.C. until agents from Homeland Security Investigations seized it in September 2019.

Months after the tablet was seized, federal prosecutors in Brooklyn, New York, initiated a civil forfeiture court proceeding which would ultimately lead to its return to Iraq, which is currently pending. A special ceremony will take place at the Smithsonian’s National Museum of the American Indian, where officials from Iraq will receive the tablet to bring back to its proper homeland.

RELATED: These Stores Have The Best & Worst Return Policies This Year

Audrey Azoulay, director-general of the U.N. Educational, Scientific and Cultural Organization, speaks more in detail about the situation. “By returning these illegally acquired objects, the authorities here in the United States and in Iraq are allowing the Iraqi people to reconnect with a page in their history,” she says. “This exceptional restitution is a major victory over those who mutilate heritage and then traffic it to finance violence and terrorism.”

How it got into the hands of Hobby Lobby

So, how did it end up in the hands of Hobby Lobby owners? Well, the owners of the Oklahoma-based company collected artifacts for the Bible museum… and on a pretty large scale, too, that led to some legal issues. Steve Green, the president of the company, agreed to buy more than 5,500 artifacts in 2010 for $1.6 million – this ended up being a fraudulent scheme that involved middlemen and the use of phony invoices, shipping labels, and other types of paperwork. In order to get the artifact back into the proper hands, prosecutors had to prove it was acquired illegally.