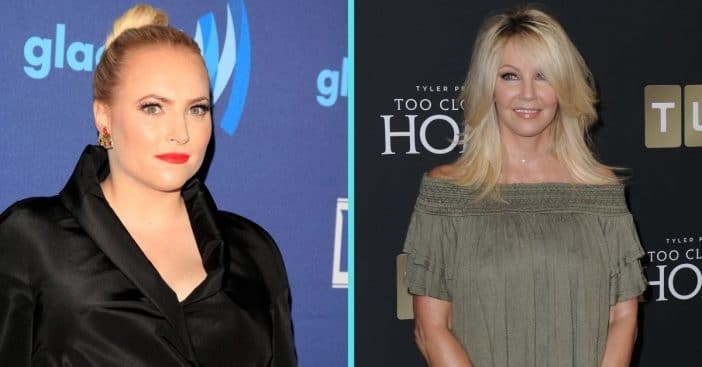 Meghan McCain has officially shared the trailer for her new Lifetime film project with Heather Locklear called Don’t Sweat The Small Stuff: The Kristine Carlson Story. The film is based on the book Heartbroken Open by Kristine Carlson and the film will following Locklear as Carlson as she struggles to overcome the sudden death of her husband Dr. Richard Carlson.

This will be Locklear’s first major on-screen role since 2017, making this a comeback role of sorts. The trailer opens up with a male voice noting how the books are “flying off the shelves,” but not for a necessarily good reason.

“Right now his books are flying off the shelves,” a male voice can be heard saying as he is signing books for fans flashes on screen, the role of Dr. Carlson being played by Vampire Diaries star Jason MacDonald. “Which sometimes happens when an author dies.”

Kristine Carlson has to deal with a lot, including being criticized by her daughters for how she is coping with their father’s death. “Sometimes it feels like dad’s death hasn’t affected you at all!” One of her daughters says in the trailer.

An outlet for McCain

She continues to work on finding meaning through difficult times. “All of the things that Richard and I lived by; seek first to understand, make peace with imperfection. Maybe there’s a lesson in all of this?” She openly wonders.

Dr. Carlson was just 45 years old when he passed away suddenly from a pulmonary embolism in 2006. When McCain announced the new film project back in July, she also noted that it is very near and dear to her as she has also struggled to cope with the death of her father, Senator John McCain, when he died from brain cancer back in 2018.

“This book helped me through my own journey in grief and loss with inspiration from Kristine and the “Dont Sweat The Small Stuff” story,” McCain writes at the time. “I can’t wait to continue on this journey with the creation of this movie and to be given the opportunity to share it with all of you and be a part of the “Don’t Sweat the Small Stuff” family. I know this movie, like the book is going to help and inspire so many people and there is no better time than now for it to be made!” The film premieres on Lifetime Saturday, October 16th.

Watch the full trailer below.

Click for next Article
Previous article: Why Did The Newly-Fired Mike Richards Just Host ‘Jeopardy’ Last Night?
Next Post: Sharon Osbourne Shares Why Being On TV Is Not ‘Safe’ Anymore