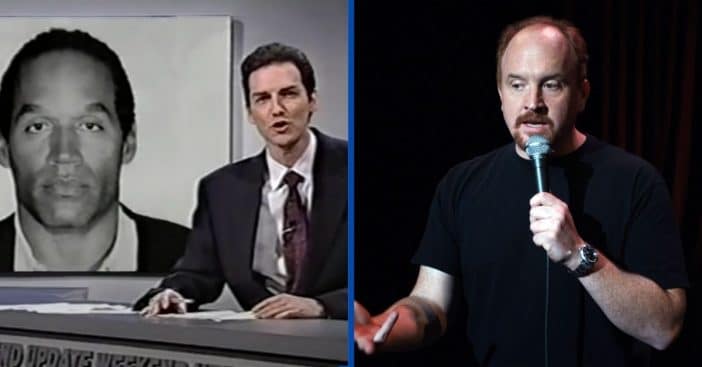 Saturday Night Live is one of the many shows that have fallen victim to scandals in TV history. With the show running since 1975 with 46 seasons under its belt, it’s pretty common that something might pop up – whether it’s a scandal with the show itself or one of its many actors.

Controversy has followed the show for years. This controversy includes its cast members getting into fights backstage and even being accused of sexual assault. Here are the top 5 major scandals in SNL history.

Former SNL star Horatio Sanz was recently accused of grooming and sexually assaulting a female fan. The anonymous teenage girl was 17 years old at the time of the alleged assault. The relationship reportedly began when she was 15. A spokesman for the SNL star calls the claims “categorically false.”

“Before filing this lawsuit anonymously, she demanded $7.5 million in exchange for her silence. We, of course, refused and will vigorously contest these totally meritless claims,” says rep Andrew Brettler.

These two famously feuded while on SNL together. The feud concluded as such with a backstage fistfight in 1978. Former SNL stars, Jane Curtin and Laraine Newman, revealed some details about the fight later on. “I think they both knew the one thing that they could say to one another that would hurt the most, and that’s what I think incited it,” Newman tells Andy Cohen.

Pete Davidson received backlash after making fun of Rep. Dan Crenshaw, R-Texas, during an episode of SNL where he made fun of Crenshaw’s eyepatch. The politician wears the eyepatch following an injury he received from an improvised explosive device while serving in Afghanistan.

Louis C.K. made headlines back in 2015 after making a joke about child molesters in his SNL monologue. “They love molesting childs [sic], it’s crazy,” he said at the time. “It’s like their favorite thing.” Continuing, he said, “If someone said to me, you eat another Mounds Bar and go to jail everyone will hate you… I’d stop doing it. … There’s no worse life available to a human than being a caught child molester … you could only really surmise that it must be really good … for them to risk so much.”

The comedian was eventually accused of sexual harassment by multiple women.

Norm MacDonald and his jokes about O.J. Simpson

Norm MacDonald and writer Jim Downey were fired from SNL after making too many jokes about O.J. Simpson. Simpson was actually good friends with NBC executive Don Ohlmeyer at the time. While MacDonald made a number of jokes, it was one specific joke he used to open the “Weekend Update” segment where he said, “Well, it’s official: Murder is now legal in the state of California.”

Which one of these scandals surprised you the most? Let’s talk SNL scandals in the comments below.