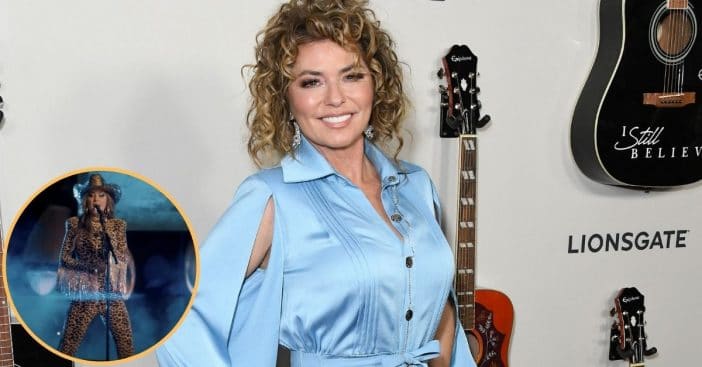 Shania Twain rocked a gorgeous cheetah print bodysuit for a special anniversary clip of Legends Never Die. “Legends never die and don’t you forget it. Happy one year anniversary @OrvillePeck!!” she wrote in a tweet online alongside the music video clip.

Peck joined Twain for the music video for Peck’s EP Show Pony. He spoke to Rolling Stone about working with Twain and how the experience had a huge impact on him.

“Working with Shania was a dream come true,” Peck said to the outlet last year. “Her music made me feel empowered as a kid and was a huge influence on me.”

In the music video, the two appear together onstage at a drive-in movie theater. A movie plays behind them on a huge screen as they perform. Peck had hinted at the collaboration on social media beforehand, tweeting pictures of the two together.

hey everybody! Just got word that the official release date for ‘Show Pony’ will be Aug 14th. I wrote a duet for it and somehow wrangled one of my all time country music icons for it. Genuinely this is a dream come true🥺. More soon! #letsgogirls pic.twitter.com/qPDb8E26bV

“I wrote a duet for it and somehow wrangled one of my all time country music icons for it,” Peck had posted on Twitter at the time. “Genuinely this is a dream come true.”

Everyone knows the name Shania Twain as she is one of the top-selling female stars in country music history. But way back in the day, she was simply known as Eilleen Regina Edwards. In an interview with Apple Music’s Home Now Radio, she opened up about how she chose her stage name. “A lot of celebrities are born with a different name than they end up with as a stage name, and I’m one of those people,” Twain said. “It’s actually a long story. In short, I was born, Eilleen Regina Edwards, and then I was adopted and I became Eilleen Regina Twain.”