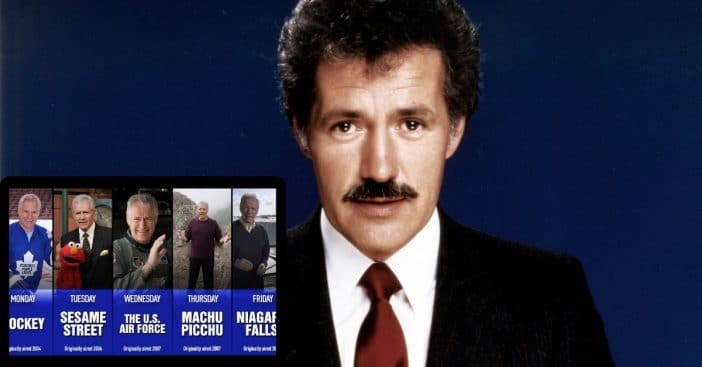 Jeopardy! has announced that it will air a two-week celebration of their late host, Alex Trebek. The celebration will consist of remembering Trebek’s fun and adventurous side, jam-packed with his best moments.

“We’re bringing back the celebration of Alex’s adventurous side for the next 2 weeks! Here’s what’s coming up first,” the official Twitter account for the show wrote in a tweet. Each day of the week will showcase a different example of Trebek’s fun and adventurous side.

Get ready for a two-week celebration of Alex Trebek

We're bringing back the celebration of Alex's adventurous side for the next 2 weeks! Here's what's coming up first. pic.twitter.com/loUpCDeqfd

For example, Monday will showcase Trebek’s love for hockey and Tuesday will focus on his time involved with Sesame Street. The show did something similar to this back in 2020 when they celebrated all the best categories he’s presented all around the world. In addition to the game show celebrating its longtime host, a mural in his honor is also in progress at the moment in his hometown.

The massive mural is in progress currently at Sudbury Secondary School, right in his hometown of Ontario. Trebek himself also went to school where the mural is going up. Christian Pelletier, co-founder of the Up Here festival where the mural will be unveiled, spoke to CTV News about the mural. “We’ve always been a big fan of him as a Sudburian but as a celebrity as well and his sense of curiosity and discovery and it just matches so well with the festival vibe and with this city and we were on the hunt for the perfect wall and Sudbury Secondary School was just a natural fit,” said Pelletier.

The mural is set for completion before the festival on August 20th. Kevin Ledo from Montreal, who is doing the art, also spoke about Trebek and his legacy. “It’s the best place to be painting him because he’s from here and it’s unfortunate that it’s after he’s passed, but I’m really excited to make this icon come to life again in the city, and make a monument for everyone to drive by and remember Alex and feel a sense of pride.”