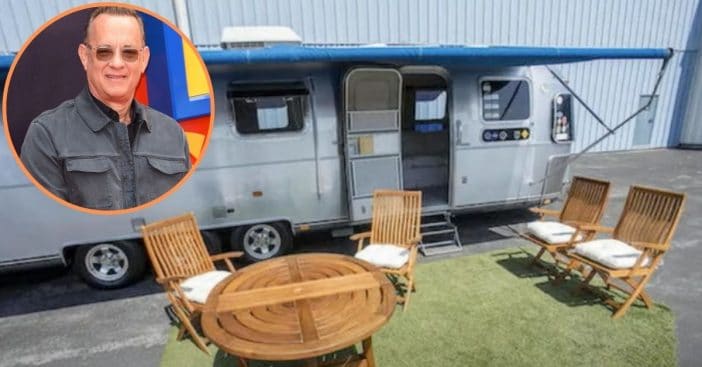 Tom Hanks is officially auctioning off his custom airstream trailer that he brought to Forrest Gump for a starting bid of $150,000. The trailer is a 1992 Airstream Model 34 Limited Excella Travel Trailer that was owned by Hanks since 1993. It was his crash pad while he was filming movies such as Sleepless in Seattle, Forrest Gump, Philadelphia, Sully, and more.

When he first got the trailer, he customized it to his liking, meaning whoever gets it will get a personalized touch of Hanks as well. “I got it in the days when movies moved slower,” Hanks tells Bonhams Magazine. “I had spent too much time in regular trailers with ugly decor and horribly uncomfortable furniture, so I decided to buy a brand-new Airstream shell with an interior made to my own request.”

All the details about Tom Hanks’ custom airstream trailer

He continues, “I didn’t want anything built-in other than the kitchen and bathroom, so it had only a desk and cupboard in the back, a futon platform on the floor, and room for a small table and chairs. I wanted a regular sofa, too, so I had one made with removable legs so it would get through the door.”

The trailer will be auctioned off with all of his accessories and furniture. This will include dishes, glasses, several espresso makers, some kitchen equipment, a teakwood table with its chairs, leveling jacks, a rollup patio awning, a pair of propane tanks, and much more.

The auctioneers note that the trailer “has always been professionally maintained and stored inside when not in use.” Hanks touches on perhaps the best feature of all in the trailer: “More than anything, an Airstream is gorgeous and cozy, which is why everyone who visited mine went away wanting one.” The trailer will officially go up for auction on August 13th alongside other vintage items, including several vintage Mercedes, Jaguars, Aston Martins, Porsche, Ferraris, and more.
Click for next Article
Previous article: A-Listers Who Were On ‘Miami Vice’ Before They Were Famous
Next Post: Barbra Streisand Recalls Meeting With ‘Fantastic’ Judy Garland