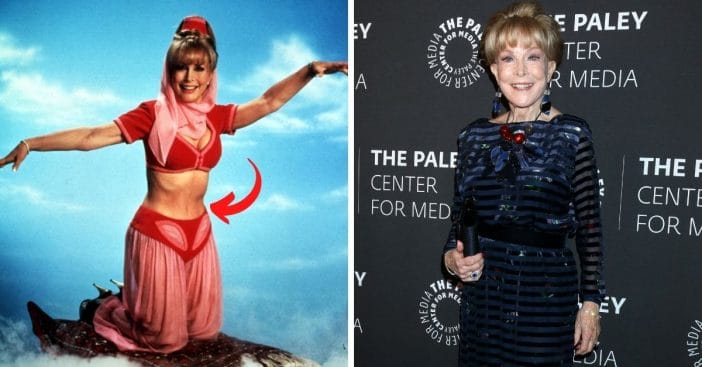 Barbara Eden recently recalled way back when how the media was infatuated with her navel when she was starring in I Dream of Jeannie. Mike Connolly, a columnist for The Hollywood Reporter, was one of the people in the media who had a fascination with her navel, in particular.

“It didn’t so much help me become a star, as I was known because I had done lots of movies before I did ‘I Dream of Jeannie’ at studios like MGM, Columbia and Universal,” Eden said to The Hollywood Reporter just recently.

She continues, “Fox would loan me to these studios for movies… So, I was known but mostly kissed, rescued and sung too. When Mike came in and started teasing me about my belly button, it spread like fire and spread around the world. We had a good time with it and I would tease him back, but I had no idea it would become something… Mike was a wild man.”

RELATED: ‘I Dream Of Jeannie’ Secrets Will Help You Relive This Magical Show All Over Again

She talked to Fox News a while back in 2017 about the same topic. “I have a big ‘thank-you’ to the media for that,” she said at the time. “I was on the set one day and [a writer] for The Hollywood Reporter walked on the set and right over to me. He said, ‘I don’t believe you have one.’ I said, ‘A what?’ And he goes, ‘A belly button!’ And then he poked me in the middle! He started writing about my belly button… The next thing I knew, the ‘Laugh-In’ wanted to premiere my navel on NBC. I know a lot of women are known for very glamorous body parts, but my navel? Ha!”

Eden has also said that she doesn’t “miss a thing” about television in that era. Rather, she’s very eager about Hollywood’s future and the new opportunities arising for its stars. “I’m very happy that I lived during that time. I’m happy that I had my beginnings then, but things changed. What a wonderful time now, more actors are working than ever before with all the companies like Netflix and Amazon, all of these movies and TV shows they are producing.”

How she feels about turning the big 9-0

The star also talked about how she feels about turning 90 years old. “It’s like any other birthday, I’m just happy to be here,” she says. If anything, she’s just looking forward to working more! “I really don’t think about it. Everybody else does but I never have. I’m looking forward to going back to work. In February of 2022, I’m going to do a show with the Edward Twins. They’re wonderful impersonators. I’ve seen them many times and they’re great artists.”