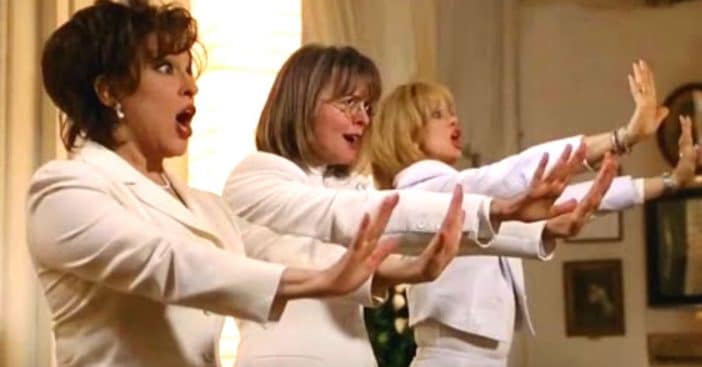 Diane Keaton’s career began in 1966 and since then she’s become prolific both for her acting prowess and her iconic wardrobe. One of her most celebrated films is First Wives Club, of which she has plenty of strong feelings – and yes, even a favorite scene.

The movie stars Keaton, 75, along with Goldie Hawn and Bette Midler as divorcees wronged by their husbands for younger women. The 1996 film offers some exhilarating scenes, one of which is actually a favorite of Keaton’s new generations might call “iconic,” and though she loves the scene, Keaton isn’t quite sure what that means.

On June 11, Interview Magazine shared an interview featuring First Wives Club star Diane Keaton. In it, she received questions from 25 famous stars in their fields such as acting, music, and the like. One inquiry came from Ariana Grande, who first asked, “What is your favorite line or scene from The First Wives Club?”

To this, Keaton revealed, “It’s not a line, but performing the song “You Don’t Own Me” was so fun.” The moment in question comes near the end of the film where each woman goes about finding closure in her own way. Keaton’s Annie MacDuggan-Paradis rejects the advances of her estranged husband Aaron after fighting so hard to rekindle affections. Instead, she and the women perform the ballad “You Don’t Own Me,” originally recorded by Lesley Gore.

What exactly does it mean to be iconic?

Hearing this, Grande pressed, “How does it feel to be so […] iconic?” At this, Keaton had answers and questions of her own. She began, “I don’t exactly understand what that means but it’s very kind of you to say.” Keaton then countered, “Can you explain to me how I’m iconic? What is that?” To Keaton, it may be her favorite scene in First Wives Club, but thinking of it as “iconic” as modern viewers might call it is surreal, even unbelievable. “I understand certain aspects of it, but it’s hard for me to deal with that,” she explained. “I don’t really see it that way. I live with myself and I’m hardly iconic. I get up in the morning and it’s me again. I’m just another person saying, ‘Gee, I’d better feed the dog.’”

As for the famously single actress’ favorite on-screen lover, she has one of those too. The question, “Am I the best on-screen lover you’ve ever had in your long list of leading men?” was posed by her 1988 The Good Mother co-star Liam Neeson. To this, she assured, “Yes, of course. That goes without saying. And you’re easy on the eyes. I don’t think I’ve seen you in 30 years, but yes, you’re the best on-screen lover ever. No hesitation on that.”

As for her favorite on-screen kiss, however, that goes to Morgan Freeman in 2014’s 5 Flights Up.