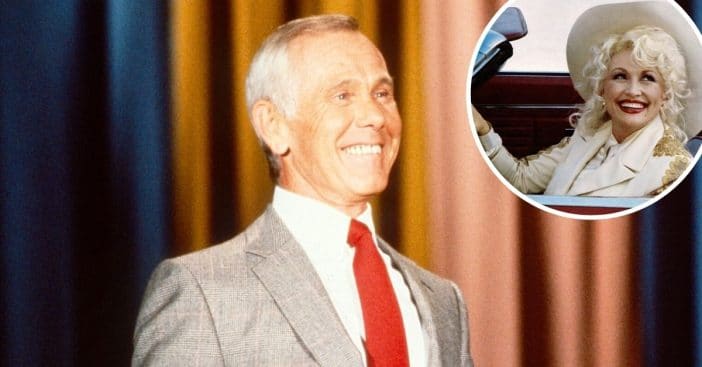 Do you remember when Dolly Parton appeared on The Tonight Show Starring Johnny Carson and he flirted with her? The episode aired in 1977 and he asked if she minded all of the comments she received about her body and her looks. Dolly has had a lot of plastic surgery and is pretty open about it.

Dolly admitted, “It used to when I was real young in the business, when I first moved to Nashville. I didn’t quite know how to take it, but anymore there’s not a road show on the road that don’t make some sort of jokes. A lot of the country music people — good friends of mine — they do jokes.”

Since Dolly wanted to get ahead of the jokes, she would often joke about herself before others could! She revealed that a lot of people ask if she’s had plastic surgery. Johnny said he would never ask. However, it led him to say another awkward comment.

He said, “I have certain guidelines on the show.” Eventually, he added, “But I would give about a year’s pay to peek under there.” Talk about uncomfortable! Dolly did look like she was blushing but she laughed. It apparently didn’t bother her that much because she went back on his show a few years later.

So, what was actually a year’s pay for Johnny in 1977? Reportedly, he made around $4 million per year back in the day. By the ’90s, he was making $25 million per year and was one of the highest-paid television personalities out there.

RELATED: Dolly Parton Shares Her Past And Present Celebrity Crushes