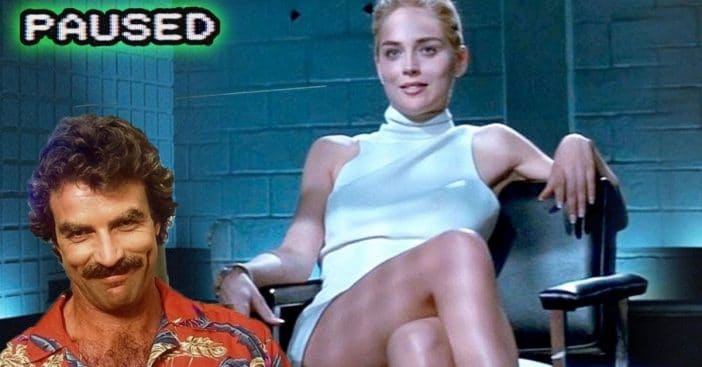 Nobody actually likes to pause a movie. It interrupts the immersive experience and pulls you back into the real world. But sometimes you need more popcorn. And sometimes your bladder feels like John Hurt’s stomach in Alien. And sometimes there’s a moment in a movie that forces you to just pause, rewind, and watch it again.

Those are the best moments. Whether you thought you saw something gruesome, barely caught a blooper you want to see again, or were blown away by the sexiness of a scene, sometimes the pause button is your best friend. Let’s take a look at some of the most paused moments from classic movies.

1. Hanging Munchkin: The Wizard of Oz

The light-hearted children’s tale filled with talking scarecrows, evil witches, and…. Dead munchkins? Oh my. If you believe this popular urban legend, during the scene known as the Tin Woodsman sequence, fans spotted an eerie image. As Dorothy, the scarecrow, and the tinman skip merrily off to Oz, an allegedly heartbroken actor who played one of the munchkins on set can be seen morbidly swaying in the distance after hanging himself.

RELATED: Do You Remember? 9 Insane Facts About The Set Of ‘The Wizard Of Oz’

For years people have paused the movie to try and prove the existence of a tiny, tragic death on set. However, the studio claims that the body is in fact a crane borrowed from a local zoo to make the forest seem more alive. Since the rumor didn’t start until The Wizard of Oz came out on home video, and the picture quality dramatically decreased, I guess we’ll have to take their word for it.

How committed as an actor would you be to not ruin a shot on set? Would you ignore glaring lights and intrusive booms? Would you eat a fly? Because that’s exactly what Paul Freeman appears to do in Raiders of the Lost Ark. In a scene in which Indy confronts his nemesis with a rocket launcher, a fly lands on Freeman’s face and slowly starts to crawl towards his mouth, before disappearing altogether.

Countless people have spent far too long taking this scene frame by frame, trying to Sherlock whether or not Freeman actually pulled an old lady and swallowed the fly. Unfortunately, Freeman has denied actually eating the bug. He says that, instead, several frames of film were removed that showed the fly buzzing off to enjoy another day of being useless. Still, the fact that he didn’t flinch during the scene is impressive enough.

We all know that stormtroopers are incompetent. How many laser blasts did they fire at Luke and Han while missing every time? Thousands? Millions? And they let not one but two death stars blow up on their watch. But who knew they would struggle to just walk through doors?

In episode IV, as our heroes are desperately trying not to be trash compacted, a group of stormtroopers slowly job through the base. A door whooshes open, and in a blink, the trooper on the right’s head comes into solid contact with the top of the frame. Which is understandable considering the size of those things. Who knows who was the first person to find this blooper, but bless them, because watching it, rewinding, and watching it over and over is one of life’s joys. It’s just so funny.

4. She Wouldn’t Harm a Fly: Psycho

Psycho is certainly an unsettling movie. A tale of murder and mommy issues in which a disturbed man dresses up as his dead mother to murder unsuspecting travelers. In addition, the film’s final scene is the creepiest of all. Having been caught and committed to a psych ward, Norman Bates gives an intense inner monologue as his mother. The scene climaxes when Bates lowers his jaw, stares straight into the camera with hooded eyes, and protests, “She wouldn’t harm a fly.” Suddenly, his mother’s desiccated skull is briefly superimposed on his face for a brief second.

Now by this point in the movie, Hitchcock has taken such a psychological toll that many viewers thought they had hallucinated the momentary ghouly image. However, as many people have found to their horror, pause the film at the perfect moment and you will indeed see one of the most terrifying images you’ll ever see.

The plot of Teen Wolf is very similar to every other teen sports movie. Average kid, played by Michael J. Fox, realizes that he is not so average. He uses his uniqueness, in this case being a literal werewolf, to lead his team to victory in the big game. However, zoom in on the celebrations in the crowd, and you’ll find a little nugget that sets this movie apart. An attempted two nuggets and a hotdog to be exact.

While everyone else is jumping up and down in raucous ecstasy, one bold extra seizes the moment in an unexpected way. If you pause the movie in exactly the right places, you can spot the man undo his pants and unzip his zipper, before finally seeing him with his whitey tighties clearly exposed. Who knows how far the attempted flasher was planning on going, because thankfully for every viewer the movie’s editor cut the man out after that.

Three men, a baby, and a ghost? If rumors swirling around this classic comedy are believed, then yes. The story goes that a young boy had died in the house where the film was shot and continued to haunt the production throughout the shoot. More fuel was added to the fire when a discerning viewer noticed what appeared to be the ghost boy himself appear in the background of a scene. This time, eerily hovering behind a curtain over Ted Danson’s shoulder. And yes indeed, if you pause the movie at the perfect point you can see the specter, as clear as day.

However for lovers of the spooky, unfortunately, the image has a boring explanation. In the film, Danson plays an actor and has cardboard cutouts of himself all around the house. This is what fans actually see when they pause the movie. This tame version of events hasn’t stopped would-be ghost hunters from seeking out the arcane with the help of their pause button though!

Disney. The wholesome animation company that makes movies for kids… And slips subliminal, raunchy messages into their films? Some viewers of The Lion King claim that that is exactly the case. The scene in question happens about three-fourths of the way into the movie, as Simba, Timone, and Pumba flop down on a cliff. A cloud of dust gets thrown into the air, and supposedly comes together to spell sex in the sky.

This rumor spread like wildfire through the nation’s elementary schools, and gaggles of preteens excitedly searched through the classic to find the perfect moment to freeze the movie with the funniest word a twelve-year-old could imagine on the screen. Sex. And unlike some other pause moments on this list, this one has a basis in fact. In an ode, to themselves, The Lion King’s special effects department did put the not dirty at all abbreviation SFX into the sky. Apparently, we all just have dirty minds.

Basic Instinct. And just like that every horny person in America knows what’s coming next. I’ll set the stage: Murder suspect Catherine, played by Sharon Stone, is interrogated by a detective played by the run-of-the-mill Michael Douglas. Trammel is wearing an incredibly short white dress and has legs that go on for days. We know her affinity for going commando from earlier in the movie, so for the entire scene, shot at waist level, of course, everyone is waiting with bated breath to see if she’s going to uncross those legs. And then boom! It happens. Stone full-on flashes the camera and thousands of pause buttons on thousands of remotes haven’t been the same since.

There you have them. Some of the most paused movie moments of all time. Have you seen any of these movies? Did you catch any of these moments? Which pausable moments did we miss?

Click for next Article
Previous article: Diane Keaton Admits Why She Never Got Married
Next Post: Eartha Kitt’s Daughter Says Her Mother Was Totally Different At Home