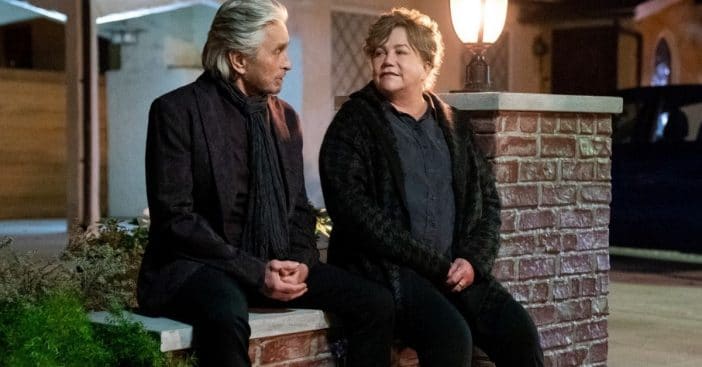 Kathleen Turner and Michael Douglas play exes in The Kominsky Method but in real life, they are great friends. They first worked together in the 1984 film Romancing the Stone. Now, they are happy to be working together again on the Netflix show.

Kathleen said they immediately felt chemistry while working together again. She said, “I think it was pretty immediate, even though we [filmed] this whole thing with COVID protocols, so that added to the difficulty. [Michael, myself, and the cast] couldn’t really be together much at all. So we had to really just jump into it [on set].”

Michael also shared a clip from an interview where Kathleen and Michael talked about when they first met. They had lunch and immediately became close friends. They loved working together so much on Romancing the Stone that they were happy to have the opportunity to work together again so many years later.

For fans of the show, Kathleen even gave a little bit of a spoiler in a recent interview with Fox News. She talked of her character Roz and Michael’s character Sandy’s relationship. “I think they are reminded of why they were attracted to each other,” she said. “They started to have a certain warmth toward each other again that they had lost. It’s kind of intriguing.”

The third season of The Kominsky Method is now streaming on Netflix. Do you watch the show?