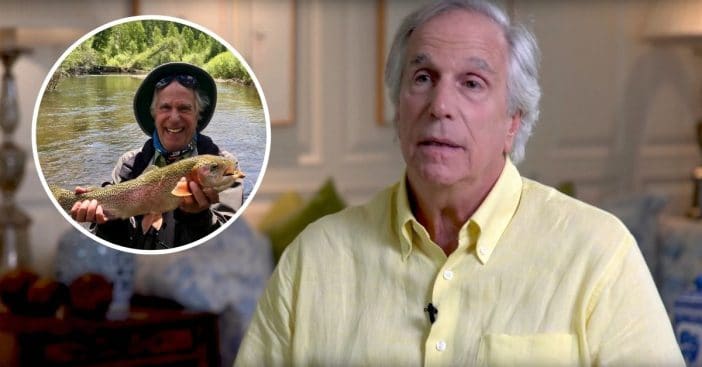 Henry Winkler, the actor best known as Fonzie from Happy Days, got some criticism after posting a photo of himself fishing. He shared a photo of himself smiling while holding a trout. He was fishing and caught and later released the fish.

Henry captioned the photo, “I can’t even express the beauty everywhere on our planet.” However, some people weren’t happy! Some are against catch and release fishing and think it is mean.

I can’t even express the beauty everywhere on our planet pic.twitter.com/K0uzx6gfiN

One person commented, “And leave it to a human to disrupt that beauty to take a selfie to post on Twitter to get likes. Imagine if that fish held you under water to get a selfie. Please don’t encourage this!” Others agreed while some thought it was a nice photo with a beautiful background. On the flip side, someone wrote, “Wow. Nobody allowed to catch a fish and eat it anymore? I’m all for catch and release too, but some of you all are crazy!”

It seems that Henry really loves fishing because he has even written a book about it! The book is called I’ve Never Met an Idiot on the River and he talks about his love of the great outdoors. Henry hasn’t responded to the commenters but he has left the photo up.

What’s your take on Henry’s selfie? In conclusion, listen to Henry talk more about his favorite hobby in the interview below: