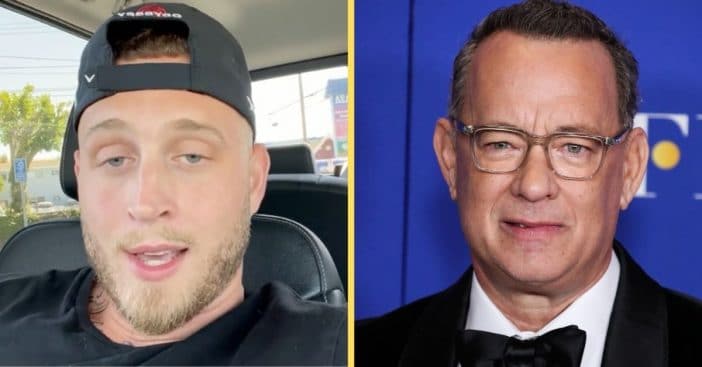 Tom Hanks is taking the hit recently for their son Chet Hanks in a new scandal, as he declared on social media that he’s gearing up for a “white boy summer.” He posted a video recently saying, “I just got this feeling, man, that this summer … it’s about to be a white boy summer.”

He continues, “Take it how you want. I’m not talking about Trump, NASCAR-type white. I’m talking about me, Jon B., Jack Harlow-type white boys, you know what I mean? Let me know if you guys can vibe with that, and get ready. ‘Cause I am.”

This left a lot of people wondering how Chet and his father, a beloved actor, are even related. “How did chet hanks become the way he is with the parents he has like what is his origin story,” one online user asks. Another says, “I physically can not imagine Chet Hanks and Tom Hanks talking to each other.”

Another adds, “Chet Hanks is the price we all must pay for Tom Hanks neglecting his parental duties to give us all those classic movies.” Well, Chet came back to social media the next day to address all the comments he received. “Woke up this morning — internet gone mad, again, sheesh,” he says. “But I just want to drop a few rules and regs for the white boy summer. Rule No. 1 — to all my white boys out there — no plaid shirts. OK? You can’t be looking like a picnic table out here, boys.”

He has no cares about other people’s opinions or comments

“You know what I’m talking about. Leave that s— at home. … Just put on a black tee, a white tee. You know what I mean? Keep it simple,” he adds. “Rule No. 2: No Sperry [shoes]. That’s not the kind of white boys we’re talking about, dog. OK? Get yourself some Vans, some Uggs, some Jordans. I’m not really a sneaker-head, but, you know, feel it out. … There’ll be more rules coming.”

This isn’t the first scandal Chet has found himself at the center of. Back in 2020, he was criticized for his video, speaking Jamaican patois on the red carpet at the Golden Globes. He was called out for cultural appropriation. He’s also been criticized for using the N-word in the past.