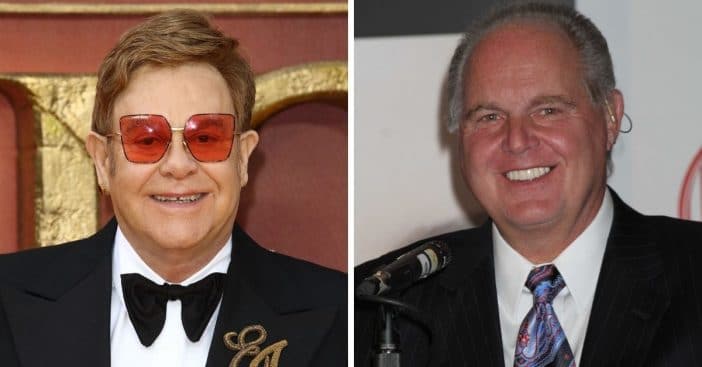 Following the death of conservative talk radio host Rush Limbaugh, people are remembering one of his most unlikely friendships, with Elton John. While the two majorly differed in political opinion, they were very good friends, and John even performed at Limbaugh’s 2010 wedding. “Life is about building bridges, not walls,” John said when his husband was asked about the invitation to the 2010 nuptials.

John reportedly added, “Maybe if I can make a great impression, people might change their perspectives on life.” Limbaugh apparently told the story himself on his radio show following the wedding.

Rush Limbaugh had a very unlikely friendship with Elton John

Limbaugh recalled that he and John first crossed paths at a hotel in Hawaii. Limbaugh was hospitalized in Hawaii soon after and John had apparently inquired about Limbaugh’s health after learning the radio host was in the hospital. Limbaugh’s then-wife-to-be saw an opportunity knocking and decided to write the performer, asking if he’d be willing to perform at their wedding.

John’s husband says that the couple “were incredibly gracious and very welcoming and very sweet and very appreciative.” In years to follow, despite the controversy surrounding Limbaugh for his political views, John spoke favorably of him. In a 2012 interview, John even speculated that Limbaugh did not personally hold some of the beliefs about the gay community that he talked about on the air.

“He sends me the loveliest e-mails,” John revealed in the 2012 interview. “What I get from Rush privately and what I get from Rush publicly are two different things. I’m just trying to break him down.” Then in a 2014 interview, John encouraged his fans that the best thing they do with something who disagrees with them is to have an open dialogue, which he did with Limbaugh.