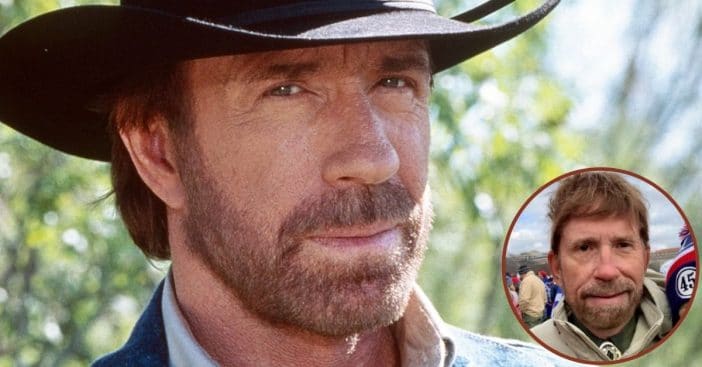 Chuck Norris has spoken out about the viral photo of his lookalike attending the U.S. Capitol riots. “It has come to my attention that unfortunately there was a Chuck Norris lookalike at the DC Capitol riots on January 6th,”  he writes in a caption on Instagram.  “It wasn’t me and I wasn’t there. Let me be clear that there is no room for violence of any kind in our society, including in the context of political protests.”

He continues, “A peaceful transition of power is fundamental to our democratic system of government. I am and always will be for Law and Order. Your friend, Chuck Norris.”

A photo recently went viral showing a Chuck Norris lookalike attending the U.S. Capitol riots that took place last week. The 80-year-old actor’s manager quickly confirmed that the man in the photo is not him. “This is not Chuck Norris and is a wannabe lookalike although Chuck is much more handsome,” the rep says. “Chuck remains on his ranch in Texas, where he has been with his family.”

Norris has yet to actually comment on the photo of his lookalike. People on Twitter have been going back and forth about whether “it’s him” or not, as some people come back saying, “I don’t think so.”

On January 6th, hundreds of people breached the U.S. Capitol in Washington, DC as the Senate was voting to certify President-Elect Joe Biden as the next sitting President of the United States. Five people died as a result.

In terms of Norris, he is best known for his starring role in Walker, Texas Ranger, becoming known as an honorary Texan in 2017. Norris is also known for acting in a lot of action and martial arts-based films and TV shows. He has long been the face of Internet memes and jokes, citing his superhuman strength. We actually note that in our Walker, Texas Ranger cast rewind video on our YouTube Channel, so check that out…

It is unclear when or if Chuck Norris will comment on the lookalike photo.