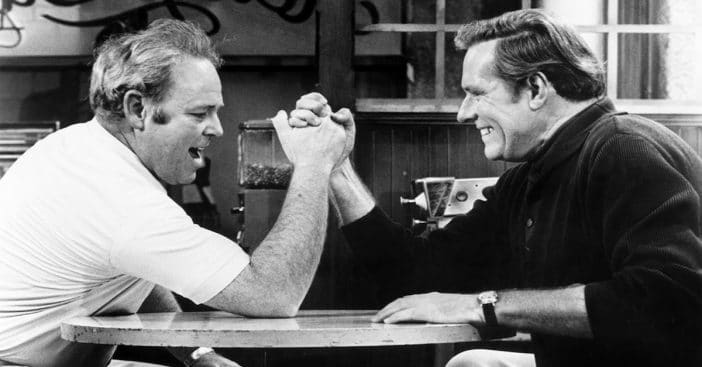 Insofar as series creator/producer Norman Lear was concerned, if an episode of All in the Family wasn’t pushing — if not tearing to little pieces — the envelope, then it wasn’t worth doing. Which, of course, is the reason that the show went after some of the most controversial story material it could from the moment it hit the CBS schedule. One example is episode five, “Judging Books by Covers,” which presented an unexpected take on the subject of homosexuality — at a time that nobody was dealing with it.

The All in the Family wiki offers up this plot description: “Archie thinks he knows a homosexual when he sees one and when Mike invites his flamboyant photographer friend Roger (Anthony Geary) to the Bunker household, Archie automatically assumes that Mike’s friend is a “flamer.” Retreating to the safety of Kelcy’s Bar, Archie chooses to spend time with his “he-man” pals, notably his old arm-wrestling crony Steve (Philip Carey), who, when hearing about Roger, reveals himself to be gay — which Archie never suspected.”

Television historian and author Jim Colucci, who is currently co-writing with Norman Lear a 50th-anniversary book devoted to All in the Family, comments, “This was a brand new show coming blazing out of the gate, because if they were going to tackle touchy issues in 1971, gay representation was certainly among the touchiest. It was a gutsy thing to do and not only did it have a good message, especially for its day, but they did it so early in the show’s run.”

RELATED: ‘All in the Family Broke Every TV Taboo — Including the First Time a Toilet Was Heard Flushing

Anthony Geary, who of course would go on to play Luke Spencer on General Hospital, discussed the episode in his interview with the Archive of American Television, stating, “It was a terrific, wonderful experience working with those people on a show that as so innovative at that time. I didn’t truly realize it at the time that history was being made. The night we taped it, All in the Family was premiering its first episode and everyone was very nervous, very excited. They didn’t really know how the public was going to react to the show, but, as it turned out, they reacted well to it.”

Jim mentions that when he wrote his book Golden Girls Forever, he commented that the first regular gay character on television was in the short-lived sitcom The Corner Bar, which aired in 1972. And this episode of All in the Family was before Soap with the groundbreaking character played by Billy Crystal — or anything else on TV. “So it was an issue that clearly existed in the world,” he says. “The Sexual Revolution had started in the sixties with the hippies and that movement. Gay liberation and Stonewall had been in 1969, so certainly it was something the world was talking about. And the gay community had started to find its very nascent voice, but it wasn’t being represented in mainstream media and certainly not on television.

“So that’s why it was so groundbreaking and gutsy of All in the Family,” he continues. “Not only did they have gay representation, but they also were breaking the harmful stereotypes that were the only thing in that day and age people knew about gay people. In 1971 people probably thought all gay people were tiny, feminine, limp-wristed men with lisps — just all the stereotypes. While any stereotype has some truth, what the episode took pains to show is that it never tells you whether Roger, Mike’s friend who wears the ascot and is very boisterous, and free talks with his hands, is gay or not. But what it does show is that the macho man, the confirmed bachelor who’s an arm wrestler and big and beefy, and a former play player, whom Archie idolizes and hangs out with in the bar all the time, has been gay all these years. And Archie just didn’t have his eyes open to it.”

He also notes that the character of Steve is not ashamed at all — actually, he’s matter of fact about it — when Archie finds out about him, which is yet another positive of the episode. “So there was just so much that the show did,” Jim points out, “to give representation to a gay character, which would have been ground breaking enough, but it also showed multi-dimensions to what being gay meant. They actually took several steps into the debate when they didn’t have to.”

Click for next Article
Previous article: Sharon Osbourne Shares Photo Of Her Husband Ozzy Doing This On New Year’s Eve
Next Post: Tanya Roberts STILL ALIVE Despite Husband And Publicist Being Told She Was Dead