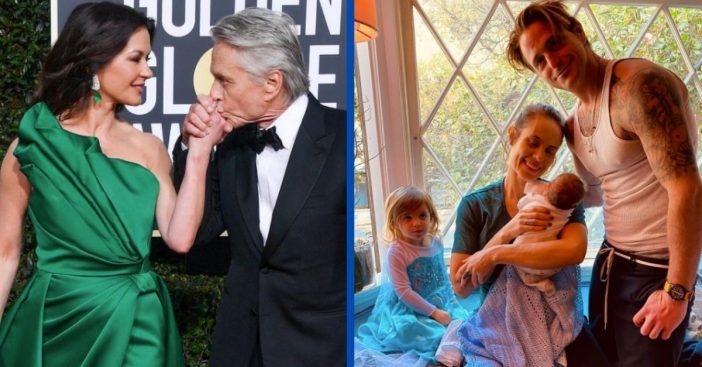 Michael Douglas and Catherine Zeta-Jones are celebrating some baby news… Michael’s son, Cameron, just announced the birth of his second baby, making the couple grandparents again! The two reposted a photo of Cameron, his wife Viviane Thibes, and their newborn son, Ryder. Also in the photo was their 3-year-old daughter, Lua.

“And a new Douglas is born!!!!! Welcome to the world Ryder T Douglas,” the image on the Instagram story read in the caption. Michael made sure to pull a serious grandfather move and point out some hilarious aspects of the photo. “So happy for Vivian and you. Don’t think Lua is sure about this yet! What a holiday present,” noting Lua’s face in the photo. “”Lua’s Face! Like……’whatever…….’ Hilarious! Congrats!!” Catherine adds.

Cameron is Michael’s only child with his first wife Diandra Luker. They were married from 1977 until 1995. Cameron has two half-siblings, Dylan Michael and Carys Zeta from Michael’s marriage to Catherine. Cameron has had a rough go in life, but it seems like things are really looking up for him! He was previously sentenced to five years in prison for drug offenses in 2010. His term was sadly extended when he admitted to smuggling drugs into the jail. He was placed in solitary confinement from 2012 until 2014 and was then released to a halfway house in August 2016. He and Vivianne were first pictured together in 2016, which began the start of their relationship and a better life for Cameron.

We’re so glad to hear that Cameron is doing better and the family has a reason to celebrate!
Click for next Article