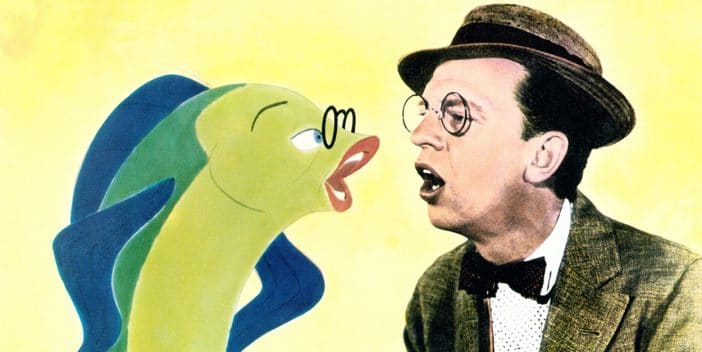 By 1964, a lot had happened to Don Knotts, best known as Deputy Sheriff Barney Fife on The Andy Griffith Show. For starters, that role had earned him three consecutive Emmy Awards for Outstanding Performer in a Supporting Role by an Actor; and he was planning on one more season of the series and then departing for a movie deal he’d made with Universal. And this was only after Andy had originally planned on leaving at the same time, but changed his mind. Then, in some ways most importantly, he proved himself a big screen draw by turning in his badge and playing a talking … fish. Actually, an animated talking fish in a live action movie called The Incredible Mr. Limpet.

It’s based on the 1942 Theodore Pratt novel Mr. Limpet, though its name was changed out of fear that people would somehow confuse it with the television series about a talking horse, Mister Ed. Don is bookkeeper Henry Limpet, who dreams of being a part of the Navy, but is rejected due to poor eyesight. The only other thing he wishes for is to have the freedom of being a fish and when he accidentally falls into the water while visiting Coney Island, his wish is brought true: he is transformed into a fish that talks like him, wears his glasses and sometimes his hat. Beyond making some sea friends, he ends up using his new skills to aid the Navy — in the aftermath of the attack on Pearl Harbor and America’s entrance into World War II — in locating German U-boats.

RELATED: It Took His Father’s Death for Don Knotts to Be Set Free from the Burden of an Abusive Childhood

Who is Henry Limpet?

While he was out promoting the film during its original release, Don described his character as a “henpecked little guy having trouble adjusting to life in general. He dreams about the fish world, the underwater world. He sings the song ‘I Wish I Was a Fish,’ and then becomes a fish as an animated cartoon.”

He also noted, in a 1964 interview with the Tampa Bay Times, “I think any character you create is an extension of some part of yourself. I think there’s some Henry Limpet in me and some of the Nervous Man in me. If there weren’t, I wouldn’t be able to play those parts. I think most of us are made up of many things. I think when you are an actor, your sensitivity allows you to explore these other things. But I never submerge my self so deeply in a part that I can’t turn it off. I never take a part home with me.

“Acting is an interesting kind of thing,” he continued. “There was once a great actor who stuttered when he was off stage, but never when he was on. When he was expressing himself as himself, he was insecure. When he submerged himself in a character who was not himself, he was not afraid. When you are being someone else, you have less inhibition. This character frees you from personal anxiety or personal inhibition.”

Years later, Don filmed a promotional introduction for the film, remembering, “This was my very first time doing a voiceover for animation. It was exciting and I’ve done a good bit of voiceover work since then, like Scooby-Doo. It was a lot of fun, and so was all the live stuff we did. It was a different character for me; I’d not done anything quite like Mr. Limpet. And I enjoyed the scene where he actually turned into a fish.”

His daughter, Karen Knotts, was decidedly not a fan of that scene. She and her brother would frequently watch the film on the family’s 16-millimeter projector.  “When it came to the part where my dad turned into a fish,” she smiles, “I would start to cry. I don’t know why. My dad was obviously still alive — he was actually in the same room with me and he wasn’t a fish — but it just made me sad.”

‘Limpet’ Struggled at the Box Office

Like other family films before it — Willy Wonka and the Chocolate Factory from 1971 immediately comes to mind — The Incredible Mr. Limpet was a delightful movie that took time to be fully embraced.

Points out Karen, “In those days, films always debuted in New York and this one got a terrible, crushing review there that it never really recovered from. That review destroyed the movie and it got no box office after that. Dad wasn’t frustrated about the movie, because it was still a great piece of work. I don’t think he was expecting anything major out of it.”

Added Don on that subject, “Interestingly, when Warner Bros. released Mr. Limpet, in the beginning, it was not a hit. I remember I went to New York to do PR for the picture, I went to a restaurant and the doorman said, ‘Hey, Mr. Knotts, welcome back to New York. Hey, I understand you’ve got a lousy movie in town.’ Anyway, it was re-released and it started to pick up and started to do better. And as time went on, it just seemed to build and build until, as I understand it, it’s become sort of a perennial favorite.”

If you’d like to check out the magic of The Incredible Mr. Limpet — a great family film — it’s available for streaming for only $4.99 at Amazon and IMDB.