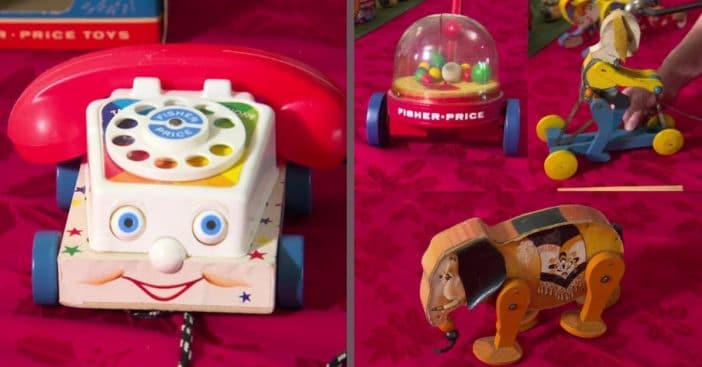 The Rock-a-Stack, the Xylophone, and many others were the cornerstone of our youth for years. They have also gone on to captivate the hearts of multiple generations as these classic toys have been passed down to them. Founded in 1930, part of the first batch of toys were called the “16 Hopefuls.” A man named Bruce Fox used to work for the company and is also a collector of these nostalgic and memorable toys.

“In 1933, this toy solved an international incident in Chile. They all were upset, and they were around a table. And the American ambassador pulled this toy out of his briefcase, and he put it on the table. And the toy started walkin’ back and forth, across the table, and everybody started laughing. And they all calmed down,” he says.

The impact of Fisher-Price

He remembers the Talk Back Telephone (now called the Chatter Phone) and how it was a major flop. “Because moms didn’t wanna buy it, because they didn’t want their kids talking back to ’em!” said Fox. “So, after a year of the Talk Back Telephone, Fisher-Price quit making it. And all they did was change the name to the Chatter Phone.” With all things considered, more than 27 million have been sold and the numbers continue to rise to this day. This proves the success of the company and its toys, all of them.

Carol Knight, the owner of The Toy Store in Sun Valley, Idaho, reveals how customers react when they see Fisher-Price toys in the store. “Well, they react and say, ‘Oh, my gosh, I remember when I had that toy as a child.’ It’s very emotional. And there’s always a smile on their face.”

It all began with Businessman Herm Fisher, who teamed up with the city mayor and his illustrator wife to create a line of toys. Chuck Scothon, current senior vice president of Fisher-Price, talks about their creative vision back then. “They believed that toys were something that would make a difference in the world,” he says. “They really delivered the same premise of making great things; they just focused on supporting the war effort at that time versus focusing on toys.”

Despite troubles, they keep on keeping on and inspire today’s youth

Fisher-Price still has a great impact on families today.  With many parents working from home during the pandemic, these nostalgic toys are keeping kids busy and having fun. They now even have toys that allow the kids to imitate their parents, like toy laptops and cell phones. Now, despite such success, it didn’t come without troubles. Just last year, Fisher-Price had to recall thousands of Rock ‘n Play sleepers due to accidental infant deaths.

As the company comes up on marking 90 years in the toy business, they’ve proved themselves to continue to be a trusted brand for families. “Anything that’s part of your childhood and is part of positive memories is always something you hold dear to yourself,” says Domenic Gubitosi, current designer of the toys, “and it’s certainly something you want for your children and your grandchildren. So that everybody – Grandma and Grandpa, Mom and Dad, and the child – share in that Fisher-Price connection.”