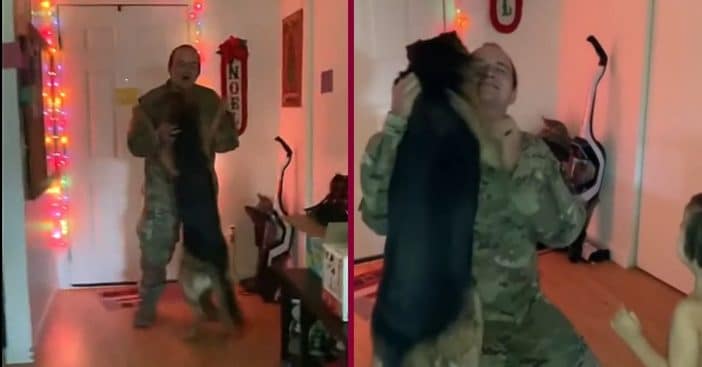 Reddit users found themselves fawning over a recent video circulating. In the video, audio featuring Skylar Grey singing “Coming Home” plays during a poignant reunion. A military man enters his home and receives a warm welcome from the family’s German Shepard.

The dog skids to a stop in its tracks, performing a very human double-take before launching into the soldier’s arms. The dog’s reaction is so real and animated – and very enthusiastic. The towering soldier, still in his gear, can barely contain the dog’s glee. There were smiles all around. Learn more and watch the video here.

A German Shepard gets a surprise

The video does not change view throughout its forty-two-second duration. It shows the front door of a home framed in festive lights. Before anyone even moves, music plays. The song is Diddy – Dirty Money’s “Coming Home” featuring Skylar Grey. I’m coming home, let the rain wash away the pain, the lyrics gently urge. Indeed, pain goes away. A returning soldier enters his home to the delight of his son happily squealing. Unseen, a woman records attentively.

But another resident starts to walk by the man. A German Shepard quickly pads by the front door – only to skitter to a halt and double back quick as can be. The dog then launches itself at the man to bestow slobbery kisses and the canine equivalent of a bear hug. The video recorder and another family member giggle as the dog happily goes up on its hind legs to better lick the soldier’s face.

The video itself does not come with much context. Some comments on platforms such as Reddit and Tumblr noted that the soldier appears to give more attention to the dog than to his son. However, Newsweek found some posts that make sense of the sequence of events. “They probably picked him up or met him at base,” one post rationalizes, referring to the soldier’s human family. “So they saw him and got home while he got his gear. The whole family was waiting for the dog moment.”

Another comment notes, “The kid would’ve been at the welcome home ceremony and already saw his dad. It’s likely not his first time seeing his son but first time for the dog.” Indeed, seeing the soldier already in the house with another family member milling about, it appears this surprise wasn’t necessarily for the humans because they had their big reunion already. This moment belonged to the bundle of excited fluff who can’t get close enough to his human friend. Watch the heartwarming moment below just in time for the holidays.

Literally stopped in its tracks from aww

Click for next Article
Previous article: The Ghost Woman From ‘Happy Days’ Dated This Actor In Real Life
Next Post: Priscilla Presley Says Elvis Became Like God To Her