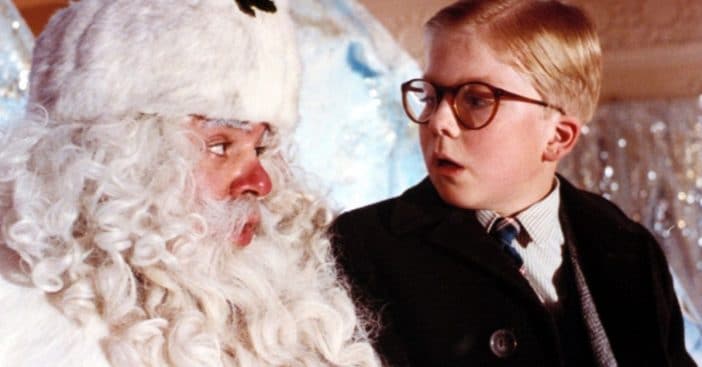 Peter Billingsley is best known for his role of Ralphie in the iconic film A Christmas Story. He was only 12 years old at the time of filming. Peter is now 49 years old and often discusses behind the scenes stories from filming the Christmas movie. It first premiered in 1983.

He revealed that during his daydream scene where he dresses up like a sheriff, he was given real chewing tobacco for the scene. He said, “The scene says he’s dressed as a sheriff. So you put the costume on. And a line in the script says he’s chewing tobacco.”

He continued, “So, sure enough, the prop man, who’s responsible for that – anything the actor touches is the prop man’s department – he comes up to me and he’s got this pouch and it says Red Man on it, and he flips it open – I swear to God, I don’t know the difference – I said, ‘What do I do with this?’ He says, ‘Here, jam it down in here.’ He says, ‘Don’t swallow, just spit.’”

Naturally, the chewing tobacco made him sick and the prop department got in big trouble with the director. “So we shut it down, I go and lay on the couch in the living room of the set for about 40 minutes until I can get this s— out of my system,” he added. “Then they did what they should have done. Someone had the good idea – they took a bunch of raisins, squished them together and then stuck that in my mouth, and I had brown spit. Can you imagine? It was a very different time then. He just gave me straight-up, whole-cut-leaf Red Man.”

It is so interesting to learn these crazy stories from behind the scenes.

Can you imagine this happening in recent times? We can’t believe this actually happened! Reminisce with this scene from A Christmas Story below:

Let’s find out what the cast got into after that EVENTFUL Christmas!! 🙂

Click for next Article
Previous article: Elvis Presley’s Ex Linda Thompson Shares What His Bedroom Was Really Like
Next Post: The Perfect Song For 2020’s Christmas Is Over 75 Years Old