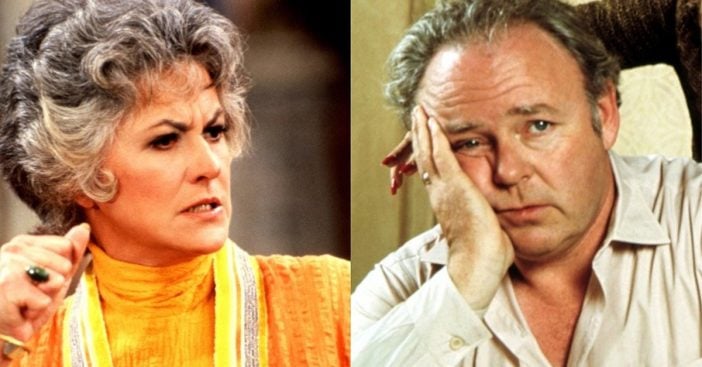 Television characters are created for all sorts of reasons, but when Norman Lear came up with the concept for the character of Maude Findley — ultimately played by Bea Arthur — it was done so with only one purpose in mind.

Explained Lear in his comprehensive Television Foundation interview, “On All in the Family, we were about eight or 10 shows in and I wanted to have somebody on the show that would kill Archie Bunker verbally. That could destroy him. Mike Stivic fought with him all the time and Mike was as poor a liberal in terms of being well-founded in his view as Archie was as a conservative. So I thought it had to be somebody out of his deep past that could hammer him over a 20-year period. You know, who could reach back into his history.”

Close friends with Bea Arthur — who, of course — would go on to play Dorothy on The Golden Girls — he and the writers developed the character of a cousin of Edith’s, who never wanted she and Archie to get married and someone who knew him that long.

Related: ‘All in the Family’: Now We Know What Happened to Make Archie Bunker the Man That He Is

And Then There’s Maude!

For her part, Bea Arthur explains that at the time her husband was in California directing a movie while she was in New York. Lear knew she would be coming out to the West Coast for a visit and suggested she shoot a guest spot on All in the Family. She was reluctant, fearful that if she didn’t like the material she would hurt his feelings, but he made a deal with her.

Relates Bea, “He said, ‘You’re going to be out here anyway and if you don’t like it for whatever reason, I’ll get another actress to play it. Don’t worry about it.’ So I thought, fine. I had nothing to lose. Well, the part was Maude, Edith Bunker’s cousin. In the episode, everyone in the family has the flu and there’s nobody to take care of anybody. And so, being a cousin of Edith’s who is politically active, a liberal, she comes to take care of them. And it’s the first time that anybody had ever talked back to Archie.”

The character of Maude went over great in front of and behind the camera. Recalls Lear, “We were three days in rehearsal when I knew that I would hear from [CBS Programming Chief Fred] Silverman and others to do a show with this woman. This big-boned, deep-throated woman who had played Maude like characters she’d play on Broadway or off-Broadway, and whom I had used in sketches on The George Gobel Show, was, even before feminism, a very strong woman.”

Adds Arthur, “A few days after we finished that episode, Norman called me — I was back in New York — telling me that the president of CBS said, ‘Who is that girl? Let’s give her her own show.’ That’s how it started. I call it a middle-aged Cinderella story.”

Maude would air from 1972 to 1978, Bea Arthur winning the 1977 Emmy Award in the category of Outstanding Lead Actress in a Comedy Series.