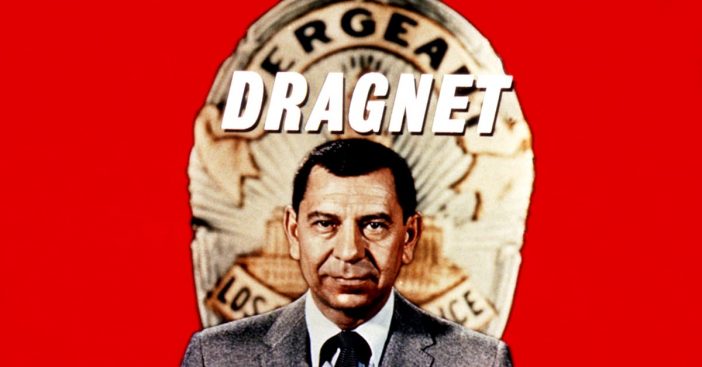 If you were try and figure out what the first TV ancestor of Law & Order was, it would likely be Dragnet, the police procedural introduced on television back on December 16, 1951. Created and starring Jack Webb — who plays Officer Joe Friday — each week there would be a new case assigned to him and a partner, which they would investigate and always manage to solve.

Webb got his start in radio, first in comedy and then with the drama Pat Novak, for Hire, about a private detective. Eventually he made the move to film, one of which was 1948’s He Walked by Night, in which he played a crime-lab technician. That experience, and the fact that the Los Angeles Police Department provided technical assistance, ultimately led to the creation of the series.

Are the stories on ‘Dragnet’ true?

Michael J. Hayde, author of My Name’s Friday: The Unauthorized but True Story of Dragnet and the Films of Jack Webb, details, “There were a couple of real cops acting as technical advisors and Webb at that point wanted to learn everything about everything. Inevitably he fell into conversation with the two tech advisors and when they heard his voice, they realized he was Pat Novak — a show in which cops were demeaned and portrayed to be stupid and not a little corrupt and incapable of solving a crime without outside help. Well, they kind of went off on him about this and he said, ‘Look, nobody believes those shows. Someday somebody ought to do a show about real policemen.’

“In the summer of 1949,” he continues, “regular series on both television and radio were on hiatus, and Webb needed work. That notion he’d mentioned to the cops came to mind and he realized that the idea had potential. He got in touch with the officers who had been tech advisors on that movie and said, ‘I think I really want to try and create that show.’ They let him ride with them in the squad car when they went to interrogate suspects, listen to the radio calls and so forth. He began to gather his material that way and that’s literally how Dragnet was born.”

That summer his concept became the basis of an NBC radio show, which ran until 1957. The television series version debuted in 1951 and concluded in 1959. All were inspired by true cases of the Los Angeles Police Department (only the names were changed to protect the innocent, as the opening narration would intone).

“One thing that made the TV version work was that Webb shot nearly everything in tight close-up,” Michael explains. “All you saw were people’s heads when they were doing a back and forth dialogue scene. The ‘big head close-up’ became known in the industry as a Jack Webb. He wanted to get in on people’s faces, because he didn’t want them to get all histrionic with stage acting technique. He wanted to keep it low-key because he instinctively knew television was an intimate medium. As it turned out, he was dead on with that and got a lot of attention for it. For a couple of years, it was the second most popular show on TV, right after I Love Lucy.”

Who was Joe Friday’s sidekick on ‘Dragnet’?

So popular was Dragnet that in its third season Webb was able to write and direct a big-screen version of it, which was Warner Bros.’s second highest-grossing film of 1954. And Dragnet would go on from there, returning to television in new episodes in 1967, teaming Webb up with Harry Morgan (Colonel Potter from M*A*S*H) as his sidekick Bill Gannon. That version ran until 1970.

He would go on to produce other series —Adam 12 and Emergency! among them — but none matched the success of Dragnet. Married three times and the father of two, he died of a heart attack on December 23, 1981, at age 62.

“I get the feeling that at the end of his life that he really wanted to get back into the thick of it,” says Michael. “It annoyed the hell out of him that shows like Police Story and Hill Street Blues were showing cops as less than saintly. I think it also bothered him that he was pitching shows to people who had been in diapers when Dragnet was the biggest thing on TV.”