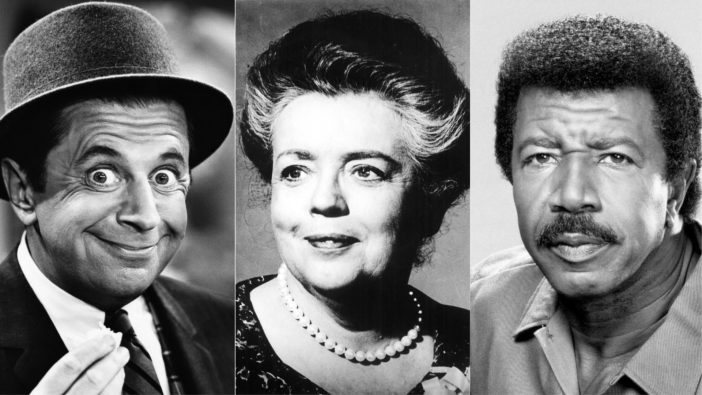 Today, with our focus as ever on Classic TV series stars, we’re looking at three birthday people who were born on December 14, just in different years. The celebrities we’re celebrating today are actress Frances Bavier, who made such an incredible impression on generations of viewers as Aunt Bee on The Andy Griffith Show; Morey Amsterdam, who truly had a diverse career, but is best known as Buddy Sorrell on The Dick Van Dyke Show; and Hal Williams, who usually played supporting roles but was an important part of sitcoms like Sanford and Son and, especially, 227.

Best known for playing Aunt Bee on The Andy Griffith Show (1960 to 1968) and its spinoff, Mayberry R.F.D. (1968 to 1970). She was actually in the pilot for the Griffith Show, which appeared as part of Danny Thomas’ Make Room for Daddy, though she played a character named Henrietta Perkins. On the set of the series, Frances could be a bit … ornery, resulting in the cast often having to tiptoe around her. She was born in New York City in 1902 and enjoyed roles on stage, screen, and various guest star appearances on television. She was a regular on the sitcom It’s a Great Life (1954 to 1956) and appeared in five episodes of The Even Arden Show as Mrs. Nora Martin between 1957 and 1958. She died on December 6, 1989, two days before her 87th birthday in Silver City, North Carolina. The cause of death was a combination of congestive heart failure, myocardial infarction, coronary artery disease, atherosclerosis, breast cancer, arthritis, and COPD.

Fans knew him best as Buddy Sorrell on The Dick Van Dyke Show (1961 to 1966), playing one of the main writers for the series within the series, The Alan Brady Show. Dick Van Dyke Show creator Carl Reiner reportedly based the Buddy character on Mel Brooks, who he wrote with on Sid Caesar’s Your Show of Shows. But before that — from 1948 to 1949 — he starred in The Morey Amsterdam Show on both radio and television. Deemed by people a human joke machine, his career spanned from vaudeville to radio, movies, and television. Morey was born in 1908 in Chicago, Illinois. He died on October 27, 1996, at age 87 from a heart attack in Los Angeles. He was married twice — to Mabel Todd from 1933 to 1945 and Kay Patrick from 1949 until his death — and has two children.