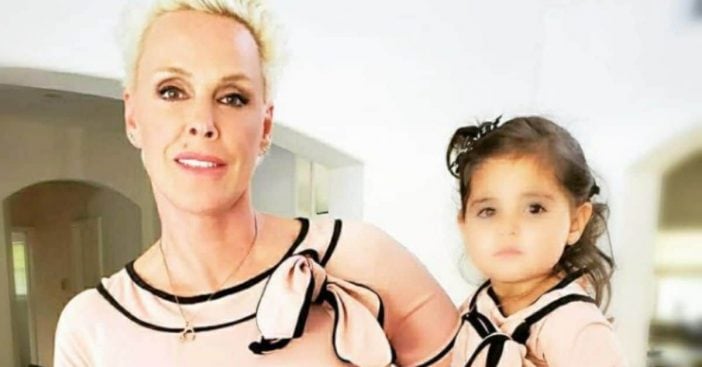 Brigitte Nielsen gave birth to her fifth child and first daughter back in 2018 when she was 54 years old. She and her husband Mattia Dessi welcomed their first daughter, Frida, who was 5 lbs 9 oz at birth. Now at 57, she is enjoying new mom life all over again and is making sure everyone knows it!

On her Instagram account, her following can see photo after photo of Neilsen and her little girl, who has gotten so big since we last checked in on them! While Frida’s face is often blurred out in photos, we can tell new mom Neilsen is living her best mom life.

Brigitte Nielsen is loving mom life, but it took some elbow grease to get to that point

Nielsen has opened up about how she felt getting pregnant and giving birth at 54 years old. “I was always like: ‘I want to do it until there are no more embryos left,’” Nielsen says, according to an article by The Guardian. “Somebody has to win the lottery.” She certainly did!

She was devastated over the failure of her IVF procedure. “You’re on a lot of medication. It is very expensive. Hormones will do different things to different women … you always think you’re going to get pregnant, but most of the time, the phone call comes and it’s: ‘I’m sorry.’ It is devastating. The partner you’re with has to be onboard as much as you, unless you’re a woman who wants to have a baby on your own. You have to stay realistic and, if you’re older, the odds are against you.”

Even when Brigitte was pregnant, hearing Frida’s heartbeat five weeks in, her doctor apparently told her ‘If I were you, I wouldn’t tell anyone until you’re 27 weeks pregnant.’ Nielsen says that “They have a 98% chance of survival, though they will have to stay in the hospital.” So she kept the pregnancy a secret until 27 weeks in, not even telling her mother. Just in case.

It clearly ended up working in her favor. “I get a lot of letters and emails from women, so excited that I’ve given them the courage,” Nielsen says of being an older mother. “Some find it ridiculous, some find it awful, and some love it. I don’t really think it’s anyone’s business. It’s my husband and my life and we love what we do.” She adds, “When people say you were 54 – yeah, well, what about all the men who are in their 60s, 70s, 80s? I saw Jeff Goldblum recently” – who just fathered his second son at 64 – “and I said: ‘Jeff! How are you doing, old daddy?’”