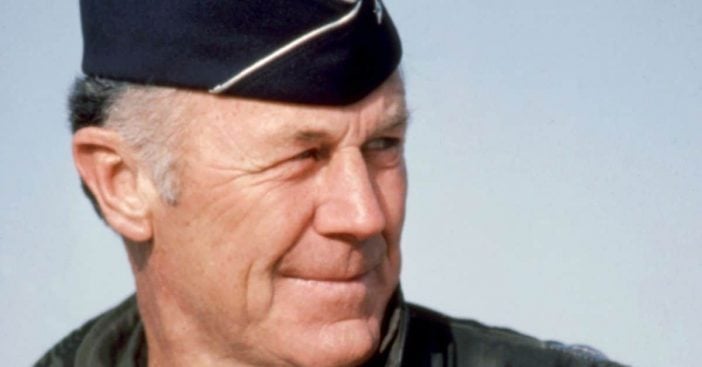 Pilot Chuck Yeager, “the fastest man alive,” has sadly died at the age of 97. He was the first person in the world to break the sound barrier. In addition, Chuck was a US Air Force officer, and his life was captured in the book and film The Right Stuff.

His second wife, Victoria confirmed his death. He recently had a fall that led to complications due to his age. Chuck was born in 1923 and enlisted in the Army Air Corps in 1941. He flew 64 missions during World War II. After the war, he married his first wife Glennis, who later died in 1990. He also became a flight instructor and test pilot in Ohio.

Pilot Chuck Yeager has died at 97

In 1947, he broke the sound barrier with his aircraft, the Glamorous Glennis. He was the first man to travel faster than the speed of sound. He continued to try to beat the record over the years. Chuck earned many awards for his skills over the years including the Harmon International Trophy by President Dwight D. Eisenhower and the Presidential Medal of Freedom from President Ronald Reagan.

After he retired, he continued to be an advisor for the government and the aerospace industry. His life was featured in the book and the 1983 film The Right Stuff.

Chuck is survived by his wife Victoria and his four children from his first marriage. He truly was a legend. RIP.

Click for next Article
Previous article: Kelly Ripa Shares The Consuelos Family Holiday Card Featuring A Fitting ‘Goodbye’ To 2020
Next Post: The ‘Christmas Star’ Is Coming For The First Time In 800 Years