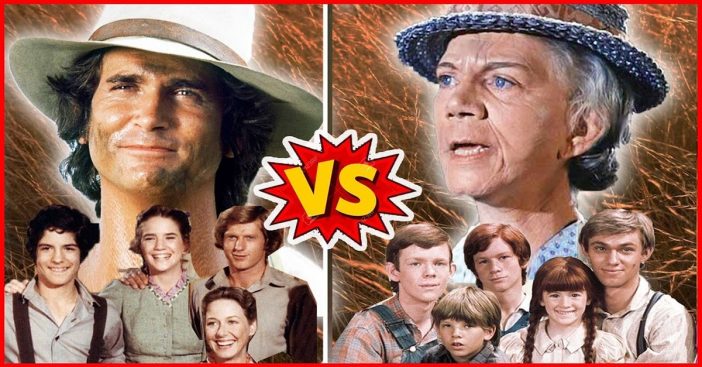 Get ready to time travel! We’re heading back to the Great Depression to snatch The Waltons up from their mountain — raising the question of why do they get a mountain? Then, we’re going to the American Midwest in the late 1800s to grab the Ingalls from Walnut Grove, Minnesota so that we can do what we do best: pit ‘em against each other!

Back in the 1970s, America sat riveted to their TV sets so that they could watch family drama The Waltons on CBS, which was so successful that NBC wanted one, too. Their response? Little House on the Prairie. In the end, America wins, because we’ve watched both shows for decades thanks to reruns, but which of them is actually better? Through the next eight rounds, you can try to be the judge, but since it’s our opinion — and we are a silly bunch — who knows what will happen?

RELATED: ‘Little House on the Prairie’ Cast Then and Now 2020

ROUND ONE: Who’s Your Daddy? It’s Charles Ingalls vs. John Walton, Sr.

No question, both are good men, always looking for work to support the family no matter what it is. But their temperaments were very different. Charles (Michael Landon) was fairly soft-spoken, his idea of disciplining his kids coming in the form of tough love; he was not into physical discipline. Neither was John Walton, Sr. (played by Ralph Waite) … although the threat of it was always there. In one episode, son Ben gives him some lip and, oh man, you get the sense that John wants to beat the crap out of him. Nonetheless, he may be gruff on the outside, but no question he, like Charles, loves his family.

So, how would they do in a fight? One online commentator summed it up as follows: “The fight would start off on an even match as both are fearless and strong, but then Charles would start crying, the tears would blur his vision and John would KO him.” Ouch.

THE WINNER: Little House. Like we said, both John and Charles are good men dealing with all those kids and most of ‘em were still breathing when the dust settled and the shows ended. Although physically we suspect John could take Charles, Charles still gets our vote. He’s Charles, and he’s played by Michael Landon. ‘Nuff said.

ROUND TWO: The Mommas — Caroline Ingalls vs. Olivia Walton

Caroline Ingalls (Karen Grassle) was sweet, humble and seemingly with infinite patience and love for her family, and very much supportive of her husband, Charles. But never question her toughness. In one episode Caroline’s leg is cut and she develops a massive infection, but pushes through it with great strength. Remember, this was a time when their idea of antibiotics would be to cut off the leg, so that actually says a lot.

Olivia Walton (Michael Learned) shares many similar qualities to Caroline when it comes to her husband and family. She’s an extremely religious woman who puts everyone else’s needs above her own, though there were two episodes where she put herself first: In “The Bicycle,” she’s invited to give one a try and she does — having so much fun that she forgets to finish her household duties (so disappointing, Olivia!). Then, in “Rebellion,” she’s grown bored of her daily routine and decides to get a perm, but when the rest of the family sees it, they burst into laughter. She, in response, whips out a machine gun and blows them away … .oh, wait. That’s what we would have done. Sorry. She pushes through, taking on everything that comes her way.

THE WINNER: Little House. We’re giving both ladies credit for being the warm, understanding people that they are, but Caroline is a true frontierswoman who had to deal with an awful lot without any of the conveniences that Olvia had access to, even during the Depression. So Little House is on top this time out.

ROUND THREE: The Best Grandparents

You cannot think of The Waltons without thinking of Grandma and Grandpa, and the people who brought them to life: Ellen Corby and Will Geer. Sure Grandma could be grumpy, but the loving relationship between the two of them became a lynchpin of the show and a true example that served as an inspiration to others. On Little House, we get Grandpa Lansford Ingalls, played by Arthur Hill (in the ’70s he starred in Owen Marshall, Counselor at Law). He’s a widower, wasn’t there for his family emotionally, and tried to burn down his house to commit suicide, but was saved by Charles who invited him to live with them. He reluctantly does and is there long enough to bond with Melissa Gilbert’s Laura Ingalls (but then again, everybody bonds with Laura), but is never heard from again. Hmmm. Could Laura have secretly been a serial killer and done the old guy in? Nah. Probably not.

THE WINNER: The Waltons. Grandma and Grandpa Walton. Bottom line, we didn’t really get to know Lansford Ingalls all that well, but what we did learn made us not miss him when he wasn’t there.

ROUND FOUR: Who Had the Weirdest Episodes?

When you think of Little House and The Waltons, you think good old fashioned family drama. But was your family drama ever like this? In one Little House episode, Jenny Wilder nearly drowns, suffers from partial brain damage, and has to learn to walk and talk again. A retired doctor gets her to do so — by the end of the episode. That’s some doctor! Same season, a dwarf clown named Lou looks for work to support his sick child, but a prejudiced Mrs. Oleson — and who knew there was prejudice against dwarf clowns? — prevents him from doing so. But then his small size allows him to save Nancy, who has fallen in a well, so she changes her mind and recognizes that size just doesn’t matter. Uh, okay. But wait, there’s more. Mr. Stark gets into serious debt and decides to kill his wife and daughter, then ends up at Laura’s home where he thinks that she and Jenny are them … Wait, what?

Over on the mountain, at the same time the Waltons take in a recently orphaned kid named Luke, John-Boy receives a variation of a Ouija Board and they decide to try and communicate with the dead. And it seems that the dead are talking back! Then, as Elizabeth reaches puberty, strange happenings take place like floating vases, threatening dolls, and pianos playing on their own — and it’s all dismissed as being the result of her raw emotions. Yeah, that actually does makes sense — if her name was Carrie!

THE WINNER: Little House. Those are some straaaaaange episodes and certainly not what comes to mind when you think about either show. Well, now you’ve got something new to think about. Little House edges out The Waltons on the weird factor.

ROUND FIVE: Who Won More Awards?

The Waltons took home 10 Emmy Awards, one for Richard Thomas, three for Michael Learned, three for Ellen Corby, one for Will Geer and one for guest Star Beulah Bondi. On top of that, the show itself won a Peabody Award.

Little House on the Prairie won four Emmy Awards, two for cinematography and two for music; a Western Writers of America Spur Award (nope, we never heard of that one, either, but we don’t get out much) and two Young Artists Awards.

THE WINNER: The Waltons. Sorry, but the Ingalls get their butts kicked on this one. The Waltons are victorious.

ROUND SIX: Who Had the Better Guest Stars?

The beauty of Little House is that whenever the writers started to run out of ideas, they could always come up with another kid for the Ingalls’ to adopt. One of them, James Cooper Ingalls, was played by Jason Bateman in seasons seven and eight. Jason would go on to star in Silver Spoons, The Hogan Family, Arrested Development and then had a successful movie career before re-hitting pay dirt with the Netflix show Ozark.

Remember Jack Tripper from Three’s Company? John Ritter played the girl-hungry character, which makes it even funnier that America first got to know him in 17 episodes of The Waltons as the Reverend Matthew Fordwick, fresh out of Bible school and put in the position of leading the local church. This guy was so uptight that in one episode when he inadvertently got drunk, it created a scandal that he did manage to survive. But the fun comes in the fact that Fordwick was about as far removed from Jack Tripper and that place where the kisses were hers and hers and his that you could possibly get.

THE WINNER: The Waltons.  Both shows need to be applauded for having absolutely no foresight into the fact they were giving us two actors who would become huge stars in their own right, and the Couch Potato Academy thanks them muchly.  But John Ritter wins. He’s Jack Tripper! How’s he not winning?

ROUND SEVEN: Which Was the Better Era to Live In?

Hmm. Let’s see, The Waltons kicks off during the Great Depression, which really wasn’t a lot of fun, and carries on through to World War II, which wasn’t a picnic either. Over on Little House, it was all about survival in a harsh environment, virtually no technology, disease — including plague — running rampant and every day a struggle to survive. Yeah, that doesn’t scream out fun either.

WINNER: The Waltons. The bottom line is that neither time period had the Internet, so that would be a hard pass from us. No Internet? That’s just crazy talk. But the Waltons did have cars and phones and other stuff, so we’ll give them the edge on this one.

ROUND EIGHT: Important Life Lessons They Tried to Teach Us

On The Waltons we were told or shown that we should love nature, it was important to spend time together as a family, we should eat food in moderate portions (yeah, right), while it was okay to love your work, you needed to find time for rest and play; and you had to learn how to listen and be thankful for the blessings in your life.

From Little House on the Prairie, it was important for the family to gather around the table together for meals, to do things by hand rather than look for easier ways out, be joyful no matter what crap life throws your way, reading is fundamental (especially during snowstorms), play a fiddle like Charles did and watch the rest of the family dance and sing like trained monkeys, adopt frequently, and find the joy in long, hand-written letters.

WINNER: The Waltons. Two lovely visions of what family life could be, but whose righteousness made more of an impact on America? We cynically turn to President George H.W. Bush who, in January 1992, said, “We are going to keep on trying to strengthen the American family, to make American families a lot more like the Waltons and a lot less like the Simpsons.” We’d say he failed! DOH!

With one tie, three points for Little House and four points for The Waltons, we’re going with The Waltons coming out on top, but the Ingalls have more than earned our respect.

See the battle play out “live” (not really) in the video shown above.

Click for next Article
Previous article: This ‘SNL’ Actor Set To Play George Bailey In Virtual ‘It’s A Wonderful Life’
Next Post: John Travolta Shares Rare Photo Of His 10-Year-Old Son And He Looks Just Like His Late Mother