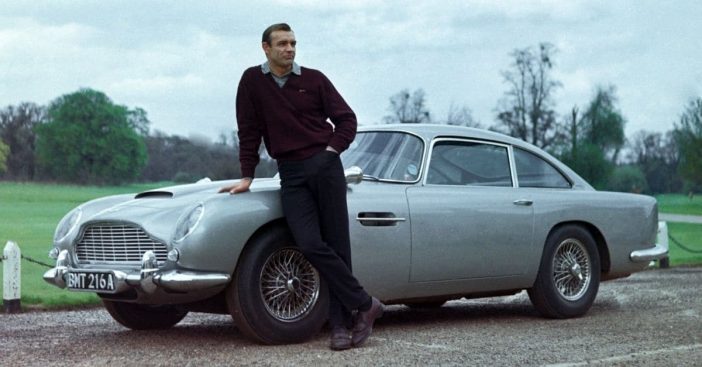 Throughout his journey as the world’s most famous spy, James Bond possesses class in his poise, attire, and ride. With tailored suits and cool gadgets, he expertly penetrates criminal rings and extracts himself from great danger. Iconically, he drives an Aston Martin. And there’s quite the history between Bond and that car.

Of course, to be a James Bond car, the vehicle needs some customizations. 007 uses cars capable of aquatic submersion, emergency ejection, and more. The Aston Martin DB5 proved no different. After some customizations, the car became a whole other star of the movies.

InsideHook recalls the moment Bond would associate himself with a new vehicle. With the simple question, “Where’s my Bentley?” he’s told by Her Majesty’s Secret Service’s armorer, Q, “Oh, it’s had its day, I’m afraid.” Nineteen-sixty-four’s Goldfinger starred Sean Connery as 007 with Desmond Llewelyn as Q. In place of the fondly remembered Bentley, Bond uses an Aston Martin DB5.

RELATED: New 007 Confirmed for ‘No Time To Die’ Bond Movie

Known as a British luxury grand tourer (abbreviated GT), the DB5 is the brainchild of Aston Martin with Italian coachbuilder Carrozzeria Touring Superleggera designing it. Production between 1963 and 1965 saw the creation of 1,059 units. This number then dropped significantly by 2020 to a little over a dozen.

Since its big theatrical debut, the Aston Martin DB5 co-starred with 007 in eight Bond films in total. But the line’s fame didn’t end there. In fact, this one fateful meeting started a long-lasting tradition between Bond and the car line. Bond himself appears in 26 films; in almost half, he drives an Aston Martin of some kind. The DB5 remains one of the most famous, though, mostly thanks to that Goldfinger appearance.

To explain the present and future, we must look to the past. Original Bond author Ian Fleming wrote 007 often using an Aston Martin. When he composed his books, however, the most recent had been the DB Mark III. To stay relevant, producers approached the carmaker and managed to get early DB4 and DB5 models just for their film. Bond’s use of the car became so important that its absence from Roger Moore’s movies made a bad situation for the Aston Martin even worse (though Moore did drive it, only not as Bond, in Burt Reynolds’ The Cannonball Run). Fortunately, it rose from the ashes — this time with a laser and renewed fame, albeit under the name V8 Vantage. Jump to 2002 and the Aston Martin was not prepared to Die Another Day and enjoyed consistent patronage from Pierce Brosnan and Daniel Craig.

Click for next Article
Previous article: Just In: Ken Jennings Named Interim Host Of ‘Jeopardy!’
Next Post: Cousin Of Elvis Presley Claims He Put Farm Animals In His Limousine And That ‘He Had Crap All Over Him’